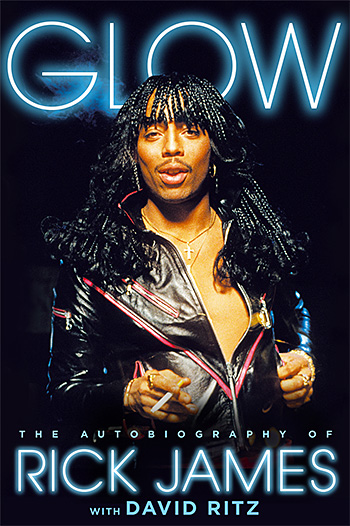 A decade ago, one couldn’t move around in online social circles without hearing the phrase, ‘I’m Rick James, bitch!” Thanks to an appearance on the cable program Chappelle’s Show, the funk legend’s eccentric, hedonistic persona was revived, yet one couldn’t shake James’ appearance—bloated, occasionally babbling and making seemingly contradictory statement, he was not a well man. He would pass away a few weeks later, and that appearance would unfairly bind him to a (admittedly true) legend that belied his talent.

Glow is actually James’ second posthumously-published autobiography. The genesis of this book started two decades prior, when James met co-author David Ritz at a Marvin Gaye recording session. Ritz was working on a book about Gaye; the two men hit it off, and so impressed was James with Ritz’s work, he and Ritz made plans to collaborate on a book together.

Unfortunately, life got in the way. James’ drug abuse would overwhelm him, and attempts to start on the book didn’t really begin in earnest until James’ incarceration. James uses his incarceration as the framework to tell his story. Instead of a direct narrative recounting of his life, Glow is formatted as conversations with a fellow prisoner, with whom he tells his life story It’s an interesting choice, and it helps give his story a more personalized approach, and it blunts the bluster of his stories about his transgressions.

Naturally, one shouldn’t expect Glow to be PG-rated, and James doesn’t disappoint. He goes into great detail his drug experiences, as well as recounting sexual escapades with girls and women of all shapes and sizes, starting with his first sexual experiences as a child with an older girl. He is frank about what he has done, and yet James seems to acknowledge, ever so subtly, that maybe there was more to life than sex and a good time. Glow would be lacking if James didn’t let his ego run free, even if the constant talk of conquests quickly grows old.

Posthumous works are tricky things, as it is rather easy to attribute hindsight and personal reflection as evidence that the subject was making peace with themselves and the world they live in. Glow is exactly the sort of book you would have expected from James; adult, sexy, raunchy, wild stories of a talented man who lived life to the fullest.