Home › Book Reviews › He Stopped Loving Her Today: George Jones, Billy Sherrill, And The Pretty Much True Story Of The Making Of The Greatest Country Record Of All Time (University Press of Mississippi)

He Stopped Loving Her Today: George Jones, Billy Sherrill, And The Pretty Much True Story Of The Making Of The Greatest Country Record Of All Time (University Press of Mississippi) 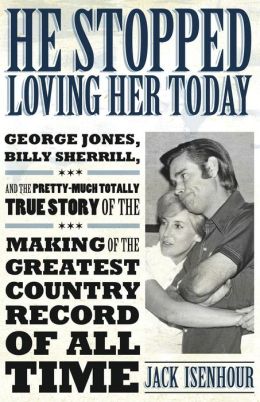 He Stopped Loving Her Today” is considered by many to be one of the best country songs of all time. It’s also considered to be one of the saddest ballads of all time as well. When George Jones released it, he reportedly hated it, because it was too maudlin, even for him. Considering Jones was in the nadir of his career due in large part to addiction to booze and drugs, his reticence is oddly reassuring, as addiction often causes an artist to lose touch with the needs and feelings of others. He was wrong, of course; the song’s staying power is because it is so terribly maudlin.  Jack Isenhour’s He Stopped Loving Her Today: George Jones, Billy Sherrill, and the Pretty-Much True Story of the Making of the Greatest Country Record of All Time is the comprehensive story of that terribly depressing song.

He Stopped Loving Her Today is more than a mere retelling of the history of the song, and its not exactly a history of George Jones. While the book covers all the bases such as the writing of the song and the recording of the song, Isenhour sends the reader down several seemingly unrelated rabbit-holes relating to country music. An in-depth discussion of country music and credibility is tempered with the author’s recollection of going to see Jones live one last time, as well as an in-depth comparison of the original version of the song with a latter-day remake.

Isenhour does spend a good deal of time dealing with several of the urban legends about the song. Did it really take Jones a year to record it? Was he really too drunk to sing it every time they recorded it? Was the final version really pieced together line by line, because the producer couldn’t get a satisfactory completed version? Did his managers really have to beg and plead with him to record it?  With eyewitness accounts, examination of the physical evidence, and the author’s keen investigative skills—all told in a vivid, humorous, yet reverential writing style— Isenhour lets the mysteries unfold page by page.

He Stopped Loving Her Today is an obsessive’s delight, and a must-read for music fans in general. Part cultural-criticism, part history, and part storyteller’s tall tales,  this is one of the finest, funniest country histories I’ve ever read, a page-turner that entertains as it educates.