Home › Book Reviews › Get Tusked: The Inside Story of Fleetwood Mac’s Most Anticipated Album (Backbeat)

Get Tusked: The Inside Story of Fleetwood Mac’s Most Anticipated Album (Backbeat) 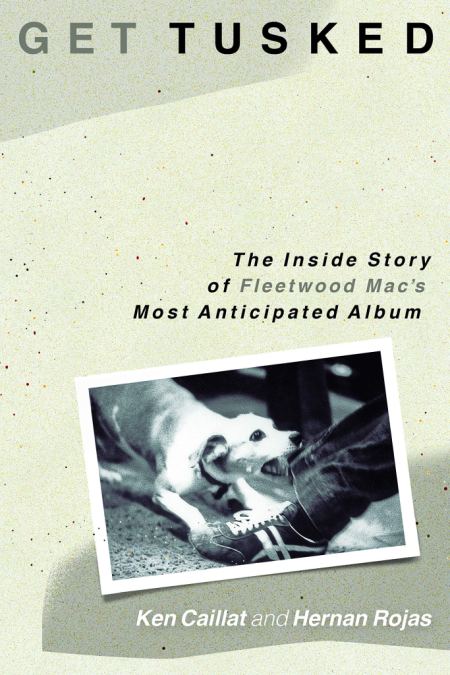 Fleetwood Mac’s 1979 album Tusk exists in a weird limbo. It’s as well known as its predecessors, but it was nowhere near as successful. It sold well enough, but it only contained two “hits,” both of which never flew as high as tracks that preceded or followed. Some say it suffers from the burden of following up unexpected international success, but even that’s not true. That distinction, amazingly, goes to Tusk’s predecessor, Rumours, which was the follow-up to 1975’s extremely unexpected multiplatinum success, Fleetwood Mac. Behind the desk for both Rumours and Tusk sat young producer Ken Caillat and his engineering assistant, a young Chilean immigrant named Hernan Rojas.  Their new book, Get Tusked, tells the tale of one of rock’s most misunderstood albums.

Understandably, the success of Rumours created a new level of expectation. Nobody felt the pressure to deliver more than Lindsey Buckingham. After all, his entry into the band (with then-partner Stevie Nicks) resulted in newfound commercial and critical success. Buckingham—a man driven to innovate—feared delivering an album that repeated the formula. Inspired by the burgeoning punk and new wave scene, Buckingham wanted rawer, more compelling, and more “real” sounds. He seemed to shy away from anything that might seem slick.

Of course, Fleetwood Mac helped define the cliché of drugged-out cocaine albums that were self-indulgent and left alone thanks to the power commercial success allows. Drinking and snorting sessions and antics related to the band’s pick of poisons pepper Get Tusked. Buckingham didn’t help matters, by declaring himself the captain of the ship at the beginning of the sessions, irrespective of what the rest of the band might have felt. Buckingham often insisted that his home demos sounded better than long, drawn-out studio polished work—which wasn’t really the case.

The bitterness of the romantic splits between Buckingham and Nicks, bassist John McVie and wife Christine, and a split between drummer Mick Fleetwood and Nicks couldn’t possibly have helped. To add fuel to the fire, Rojas and Nicks wind up together for a brief time, thanks to proximity and Rojas’s unwritten job requirement as band counselor and friend.  Surprisingly, felt pushed to the side, with much of her best material ignored or undervalued.  She did contribute two fantastic numbers; hit single “Sara,” and beloved album track “Storms.”

Unfortunately, Tusk had an equally difficult release. Insisting on a double album didn’t help—its retail price being roughly $50 today—nor did a national radio broadcast of the full album right before its release. That might be the case, but the greater issue lies in the fact that Tusk’s material was challenging and weak. Aside from the distinctive title track and “Sara,” most of the album is largely unknown to the casual listener. The album certainly become a cult classic, though, with many listeners now preferring it to the slicker material immediately before and after it.

Yet Get Tusked offers more thannthe story of Fleetwood Mac’s most difficult album. Beneath the drama a bubbling, burgeoning love story takes place between Caillat and Diane, the studio’s receptionist. Ken falls for her instantly, and throughout the book there’s a build-up of a romance. We cheer when finally they do get together, and revel in their romance. Even though things quickly deteriorated  for Fleetwood Mac, Get Tusked concludes on a high, positive note.

Get Tusked is Caillat’s second examination into Fleetwood Mac’s recording sessions. Furthermore, it’s simply a fine, fun read. It offers a fascinating peek into the complexities of one of the more drama-laden rock bands of our time. The quality of the writing here only makes us hope he continues publishing his remembrances of the albums that followed.