Slam Suzzanne: On The Floor With Your Mom (Green Monkey Records) 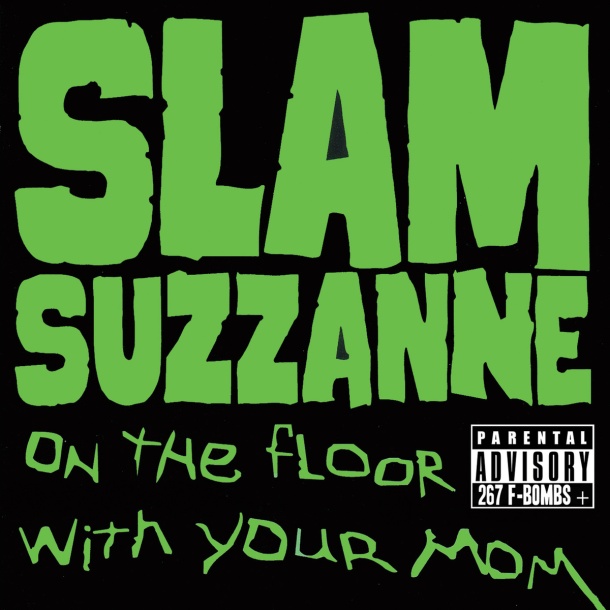 Oh, man, sometimes I miss the early 1990s. The music was better, the times weren’t being exploited for fun and profit, the underground was mostly underground, and there was no damn internet around to turn every petty thought into some profound statement. Ah, well, you can’t go home again.

Why the rumination? I’ve been listening to On The Floor With Your Mom, the sole album by Seattle-based jokers Slam Suzzanne. With an album title like that, you’d be right in assuming that the songs included would be punky, rude, and funny—and you’d be correct. They exist in the pantheon of “cool scene bands” that came and went unknown outside of the scene, and it’s a shame.

Their sound is a blend of punk and metal—never sounding like one, nor overdoing the other, with the only constant being the playful, hilarious, and, yes, somewhat juvenile lyrics. Then again, what do you expect from songs like “I Like To Fuck,” “Perforated Condom,” and “Dead Water Bunny?” Music-wise, they fit in nicely with bands like Alice Donut, Suicidal Tendencies, and ST side-group The Infectious Grooves, and vocalist Phil Bentz has the ability to make his words sound great and meaningful, even when they’re silly or absurd.

Sure, every scene has that one genius band that never gets beyond headlining local festivals and gigs, and Slam Suzzanne appears to have been one of Seattle’s better punk bands. Never too late to check ‘em out, my friends…