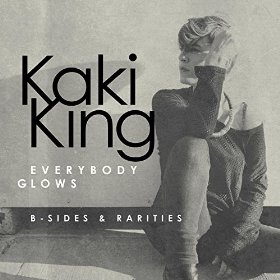 When Kaki King appeared on the scene a decade ago, she was a breath of fresh air; jazz guitar playing and indie-rock weren’t synonymous. King’s appearance with debut album Everybody Loves You heralded in the beginning of an interesting career from a woman who could effortlessly conjure up the spirits of Django Reinhardt and John Fahey while sounding completely original. She also understands one simple yet neglected rule about guitar playing: fast doesn’t necessarily mean good. Don’t get me wrong; chops are good to have, but you need to have more than chops.

Everybody Glows: B-Sides & Rarities does an excellent job of capturing King’s progression as a musician.  Yes, she’s got those chops, as witnessed on “So Much For So Little,” a demo recording of a later album track. It’s speedy, swift, and sublime; to lessen its quality simply because it’s labeled a demo track is to deny the power of King’s skill, and it is a beautiful song irrespective of what it may have later become. Same thing with “Zeitgeist,” a heavy, slow atmospheric number that can rightfully be called “post-rock,” yet retains the same elegance of style as her lighter, jazzier numbers, such as the lovely “Zamzam Well” and “Goby,” both live recordings, and superior ones at that.

Two covers break from her instrumental m.o., and are unique in their ways. First is a cover of Justin Timberlake’s “Lovestoned,” a trippy number that features some out-of-space guitar loops and a double-tracked vocal that’s quite satisfying. The other cover, however, is one of the best covers of The Cure I’ve ever heard. Her take on “Close To Me” is almost childlike, with twinkling percussion, gentle guitar, and a plaintive vocal that is instantly charming and believable, giving the song a wistful innocence that the original only hinted at.

So far, King’s been recognized for her talent, and it’s not hard to imagine she will one day take her place in the pantheon of world-class guitarists. These rarities only further the case in her defense. For the new listener, it’s a great introduction; for the longtime fan, this is a compelling glimpse of an artist at work.