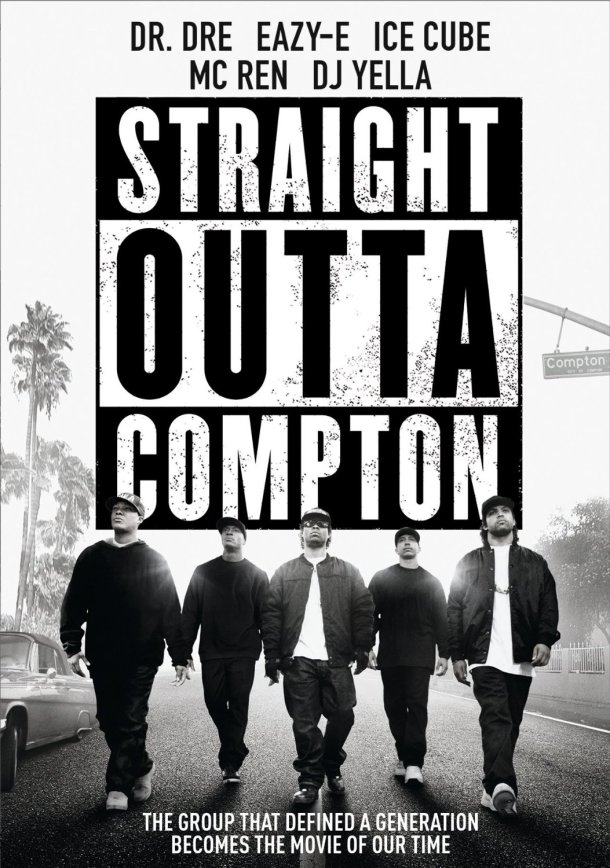 The story of N.W.A. is the story of three young men with a vision—O’Shea “Ice Cube” Jackson, Eric “Eazy-E” Wright, and Andre “Dr. Dre” Young. Growing up in Compton, one of the most notorious and violent ghettos in the United States, they witnessed plenty of horror: gangland violence, drug dealing, property crime, unemployment, prostitution, and frequent homicides were compounded by a vicious and racist police force who would routinely harass, imitate, and abuse young black men with excessive (and often deadly) force for no other reason than the color of their skin.

The three had a perfect division of labor: Eazy-E handled the business, Ice Cube wrote the lyrics, while Dr. Dre provided the music. For a while, it seemed as if they were unstoppable. Thanks to the assistance of their manager, Jerry Heller (portrayed brilliantly by Paul Giamatti), and Priority Records’ Brian Turner, N.W.A.s early singles were massively successful, even though their songs were profanity-laden and filled with violent imagery. Their debut album, Straight Outta Compton, would become one of the definitive albums of rap and hip-hop.

In spite of the group’s initial successes, things started to fracture. It soon became apparent that in the formation of Ruthless Records, Eazy- E saw himself as the sole proprietor, along with manager Heller—much to the chagrin of the rest of N.W.A., who soon found themselves being treated as mere members of a band and not as equal partners. Controversies with law enforcement over the song “Fuck Tha Police” would escalate violence, coming to a head with a full-scale riot after the group was arrested in Detroit after being warned not to perform the number. It also didn’t help that rap impresario Suge Knight had started to instigate dissent within the ranks—especially Dr. Dre—by raising questions about Heller’s management practices.

Like many stories of this nature, the tendency to go for the more fanciful details is largely avoided. Some moments that feel a tad melodramatic and might just be a bit more apocryphal, than factual, but to its credit, Straight Outta Compton avoids getting caught up in myth-making. Of course, their rags-to-riches story doesn’t really need to be embellished, as the reality of the tale is compelling enough to rise above the need for aggrandizing. The actors chosen—Jason Mitchell as Eazy-E, Corey Hawkins as Dr. Dre, and O’Shea Jackson, Jr as Ice Cube—are so convincing, both in personalty and in appearance—that one gets shivers while watching. It should be noted that Jackson is, in fact, Ice Cube’s son; though not as physically similar as the other two, vocally he is a dead ringer, and his performance as his old man is outstanding.

If there’s a flaw, though, is that the film has a tendency to meander. The director’s cut ran nearly three hours; the theatrical version runs for two and a half, and occasionally it drags. The pool party scenes at Eazy E’s house are fun, but both could have been cut in half and would have had the same effect. Suge Knight is portrayed as the dangerous, violent man that he is, but cutting out two or three of these incidents of his random and unprovoked moments of insanity wouldn’t have lessened the point.  It should also be noted that there’s plenty that is left out of the story—most notably the violence the band’s music inspired, the misogyny and domestic violence that plagued a few of the members, as well as the longstanding rumors about Eazy-E’s sexuality—but those are minor quibbles, even if they are important issues worth discussing.

Straight Outta Compton might run a bit too long, but don’t let the slow moments fool you—this is a powerful movie that has a lot to say and provides a compelling, provocative, and very human insight into a hip-hop group who broke all the rules as they were making them,only to become one of the bedrocks of the rap genre. Straight Outta Compton transcends its minor flaws and tells an important story that deserves to be heard, and is, without a doubt, one of the finest hip-hop biopics ever.