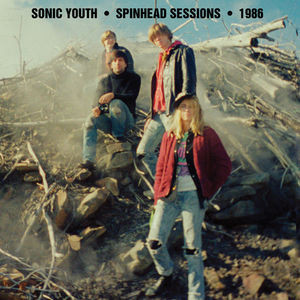 Sonic Youth, they’re over. Let’s just face facts: that all we have to go on now is a regurgitation of the band’s best and worst work, one that will be repeated ad infinitum until the music industry or the planet is fully destroyed. That back catalogue’s already been mined to death; any second now we should be seeing the umpteenth repackaging of previously released material, expanded into deluxe sets, highlighting every last Thurston Moore fart and Lee Ranaldo noodle. It’s okay, some people go for that obsessive sort of behavior, and at this point, the likelihood of anything truly revelatory coming out of the band’s vaults stands somewhere between slim and none.

But then Spinhead Sessions appears. Sourced from sessions recorded shortly after the band completed their seminal album EVOL, these sessions were sketches made in preparation for composing the soundtrack to Made In USA, a dark, disturbing road film that starred Chris Penn. The band’s compositions went unreleased at the time, officially compiled for the 1995 album Made In USA. Though brief, Spinhead Sessions compiles rehearsals and sketches from the sessions for the soundtrack, and in terms of new musical discoveries, it’s a good’n.

For this release, they programmed the most compelling piece first. Titled “Ambient Guitar & Dreamy Thing,” it is exactly that; it’s an epic, sixteen minute epic of gentle noise guitar that’s quite intoxicating; think Steve Reich and Jim O’Rourke, and you’re not far off; the biggest surprise is that it doesn’t sound like 1986; in 2016, thirty years later, it sounds like the future. Better still, it doesn’t ramble, and its length never loses its listener, even when it switches tempo to a laconic, glacially paced drone halfway through. If this were to have been the only track on the release, it would have been a worthwhile addition to the Sonic Youth canon. But there are six other songs included, and are equally compelling—most notably “High Mesa,” which is dark, ominous, and heavy rock, while “Wolf,” at less than two minutes in length, could make a case that Sonic Youth accidentally and unwittingly stumbled upon the formula for shoegazer.

Who knows what the Sonic Youth archives will produce in the next few years—if they produce anything compelling at all, it’s anyone’s guess. Spinhead Sessions is that rare exception to the archival rule—something truly compelling that for thirty years might only have been considered as throwaway by its creators.