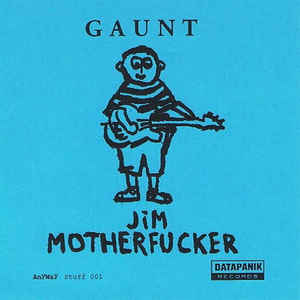 Eighteen years ago today, Gaunt frontman Jerry Wick was killed in a hit-and-run accident after leaving work one morning. His tragic and sudden death brought the end to one of Ohio’s best kept secrets, even though the group seemingly gone on permanent hiatus. Their legacy has included a handful of fine singles and five albums, the last of which had been a noble effort to reach a larger audience via Warner Brothers.

I can’t tell you exactly where I read about Gaunt for the first time, nor am I really sure what zine had the ad that I answered––Rollerderby seems possible (interesting in that its editor and sometimes Recoup correspondent Lisa Carver would briefly date Wick),  but then again so does Big Takeover, Alternative Press, Lollipop, Flipside, and many others that I obsessively devoured in the early 1990s. The point being that I happened upon an advert for a wonderfully vulgar single titled “Jim Motherfucker,” I stuffed some cash in an envelope and in a couple of weeks had amazing slab of vinyl in my possession, wrapped up in a simple tan sleeve with a sharpie drawing of a Gen-X dude holding a guitar and the title of the song.

It didn’t disappoint.  It stood in sharp contrast to the terrible heavy metal substitution that grunge was presenting the world and the sad sappy mopey shit I was listening to because of a break up and my first depressive episode, “Jim Motherfucker” is a furious blast of heartland punk rock that proudly kicks you in the nuts and gets you moving on the floor. Everything about it is electric; the production is sharp as hell, with electric guitars hitting you with the same amount of fury as an exposed nerve on a broken wisdom tooth, while Wick rants on and on about a down and out ne’er-do-well named Jim, and one soon wonders if Wick isn’t singing about himself.  Whether or not it is autobiographical doesn’t matter; the chorus is an absolutely irresistible lyric that simply repeats the title of the songs over and over––just try and not joining the sing-along. “Jim Motherfucker” is pure anthemic punk rock for those who hate anthemic punk rock. (They would re-record it for Whitey The Man, their proper debut (and the inaugural release by) Thrill Jockey, and it would still sound great, but I’m partial to this first time experience.)

“Spine,” the flip side, doesn’t quite reach the same heights, but it’s still a wonderful slab of MC5/Mudhoney-minded down and dirty garage rock,  punctuated by sudden stops and starts that only added thrills when they pop up.  I played both sides equally because dammit, this is fine rock’n roll.

But to come back to the tragedy of Wick’s death and its relevancy to my life: as I sat online that night reading about his accident, I soon happened upon an advertisement for a music website called Pitchfork Media. I had never heard of them prior, but was intrigued at the call that they were looking for talented writers to join their news team. The ad requested people to visit their website, peruse their news section,  and to come up with three news items not already featured. I did as instructed, saw no mention of Jerry Wick’s death, and quickly wrote up an obituary. I don’t remember what the other two stories were. About 15 minutes after I sent it to Ryan Schreiber, I get a note back from him saying, “Wow, he died? I had no idea. This is exactly what we’re looking for.  Welcome aboard.” They published it a day or two later, marking my debut.  More importantly, it launched my online career, beginning a legacy still going strong.

« Jessica Hopper: Night Moves (University of Texas Press)
Song Of The Day: The Decemberists, “Traveling On” »