Kathy Acker: The Last Interview And Other Conversations (Melville House) 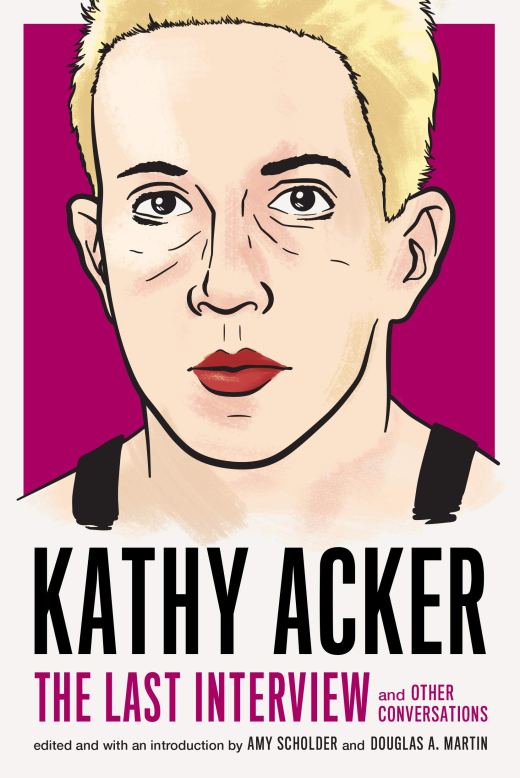 I love this book. I am so glad you sent it to me. It’s a long time since words had a sense of immediacy for me. I am writing my review as a letter to you because that’s the feel of everything in The Last Interview: a conversation between friends, a searching and even desperate longing for community and meaning/connection in politically treacherous, disconnected times (Acker broke out in the literary world in the Reagan years/AIDS epidemic). Acker made her debut back when someone would pour their heart out to one person in ink on paper and send it off hopefully, and then wait so long to hear what they said back. An interaction meant more, set in the background of loneliness and forced patience. You couldn’t just meet everyone/anyone everyday like you can online. It was special.

So many people tried to get me into Acker in my youth; they said I reminded them of her, which totally turned me off. I thought I was the only one of anything. I avoided her, except for flipping through somebody’s copy of one of her books when I was 17, and I thought, Why is she so vehement? Why so many all caps and exclamation points? I, too, was boisterous and insistent, but she was published, famous, traveled. What cage was left for her to break out from? That’s what I thought then. Now I am exactly as old as she was when she died, and I understand now that you have to keep breaking out your whole life, of any construct you find yourself in, even—especially—the ones of your own making: naming and discarding your beliefs in order to make room for new. And others’ beliefs about you. You’re never done escaping what you were if you want to be what you are.

Something she talked about in the first interview in this book, which took place in 1976, really resonated: realizing art is not the most important thing, and how do you do performance to illustrate and promote your writing when you don’t feel like it, don’t believe in it? I was having other people read my words from I Love Art as skits in New York and L.A., then I just wholesale canceled the rest for the first time in my life. Acker describes first canceling a show to promote her series about Toulouse Lautrec and then moving the next one to her bed where she wanted to read (silently) the script of Key Largo. Because that’s what she felt like doing. You wouldn’t think it does, but it takes so much guts to do what you want instead of doing what other people want you to.

So, she couldn’t find the script of Key Largo, so she decided to write her own. Why? She didn’t know. “But I was just enjoying this so much,” she said to the interviewer. “And I was so distant from people. I’d been through this like heavy sickness, and I just didn’t give a shit. I thought what the fuck, I’ll just stage this weird movie script that I’ve been writing.”

She couldn’t really remember the movie, so she kind of made it up. Then she ended up asking people—including Laurie Anderson—to play the parts instead of anything having anything to do with what she’d been writing for a year, instead of doing a reading. All this from quitting to new concept to realization of the idea within a couple weeks.

That’s just the first five pages of the book!

I love that she doesn’t look at things in a fail/succeed dichotomy. Every enterprise is an experiment, or a joke, or just to have done it. Such a freeing way to live and work. She says that to be a female writer in a patriarchy, you have to throw away the rules, the format of the novel, because it’s not set up to honestly reflect the female experience, and make up your own way. I have said and felt and done things so similarly to her, yet not because I was influenced by her. I instinctually avoided any woman in my field who came before me breaking ground, as Acker did herself. She points out that female artists are always asked who their influences are, not their ideas, as if they can only continue down a stream, not innovate.

Our ideas are so similar, and our performances, and our histories, but I don’t think our books are similar—I don’t know, as I still haven’t read any of hers. But she says she plagiarizes various texts, or just repeats the plot of, say, Don Quixote—at least as a starting point—as a device to free her from traditional narrative and character development. I don’t plagiarize or copy any plots. I tell my own stories and others’, but, like her, I buck the traditional narrative and character development. Also like her, “I always work fairly literally. I don’t make up things.” And this! For her to be satisfied with what she’s working on, “I have to have the feeling that nobody could possibly do this, it’s too stupid.” My god, I have said those very words! I’m sorry I’m talking so much about myself! I just think it’s extraordinary how profoundly I echo her without ever having heard her call, her roar. And you sent this to me to review because her Spice Girls piece reminded you so much of me! (I absolutely did; it’s a fantastic piece of writing, and if you’re familiar with Lisa’s publication Rollerderby–which, I must declare, was and is one of my biggest influences as a young writer–you’ll understand exactly why I made that connection–ed.)

Perhaps, like I find with Burroughs and other experimental writers, her books aren’t so much to be read as to disseminate ideas, and a collection of interviews or conversations like this one is actually more enjoyable and personable than anything they signed their name to. I wish I had met her. After reading The Last Interview, I feel like I have, intimately…I mean like we talked all night long, without distinguishing between what’s lies and what’s true, because it’s all just stuff we say to each other…I mean life is, sharing life is. It’s all (the truths and the mistakes) paths for life to saunter down. Jokes disguised as intellect and intellect disguised as jokes. As Acker was dying of cancer, she realized that the story we tell, the narrative she fought against her whole life, is real. But we don’t make it up. It makes itself known. “The universe is meaning.” She completely reversed. I love that.

You can write back to me if you want.