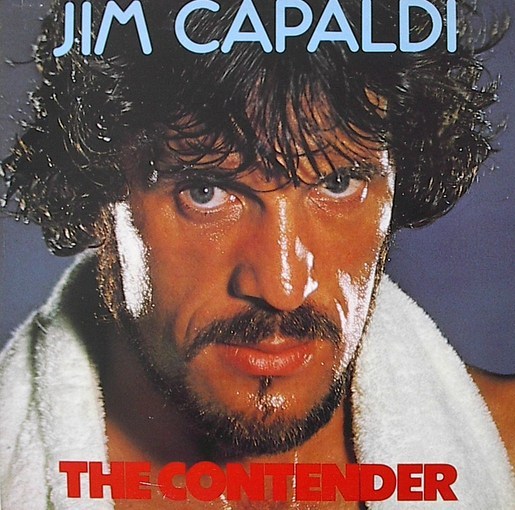 Jim Capaldi was the drummer and founder of progressive/psychedelic band Traffic. When the band split in the early 1970s, he launched his solo career. In 1977, he released his fourth album, The Contender, and his first for Polydor.  It’s a quite varied listen, and it’s rather obvious attempt at a contemporary commercial record, though his guitarist Pete Bonas denies it.

The Contender sounds great; it’s a well-recorded, well-arranged record. Capaldi and his band tackle numerous genres of music throughout. The album starts with the hard-rock swagger of opening number “Dirty Business” and then visits lush ballads (“Game Of Love,” “The Contender”), LA singer/songwriter rock (“Hunger and Greed”), and R&B (“I’m Gonna Do It”). There’s not a song on The Contender that isn’t enjoyable, and it’s obvious that Capaldi is a master arranger and singer, adept at handling a wide and varied range.

It’s that range, though, that serves as the album’s greatest flaw. One walks away from The Contender wondering just who Jim Capaldi was. While he had the technical chops to pull off nearly any style he wanted, it’s the ease at which he changes his sound. Instead of sounding innovative, he sounds imitative. It’s not hard to hear the influence of the more successful bands of the era–Elton John, Steely Dan, The Eagles, and Eric Clapton.  The disco edges feel too contemporary, as if Capaldi’s trying a bit too hard. “Daughter of the Night” isn’t bad, but feels out of place among the rest of the album, as does “A Good Love,” a song which, to his credit, was left off the original version of the record. The oddest turn is on his cover of the teen pop hit “Sealed With A Kiss,” one that starts off with a dramatic entrance, but then converts to a Philadelphia-style R&B-style number. Interestingly, these three songs simultaneously are the best songs on the record and feel out of place among the rest of the album. (It should also be noted that during his lifetime, Capaldi would dismiss The Contender  for its disco-minded productions.)

Capaldi fares much better with the live concert included in this reissue. Recorded live in Groningen, Netherlands, in March of 1978, it’s one of the first gigs with the band that accompanied him for the album, and subsequently dubbed The Contenders. Gone are the studio tricks and sheen of the album, as are the ambitious arrangements. It’s a straight up blues-rock gig, and the band’s in excellent form as they run through highlights of Capaldi’s solo records. Only two songs from this set, “Short Ends” and “Elixir of Life” appeared on The Contender. The rest of the set is mostly upbeat, up-tempo rock, as well as interesting banter that reveal the themes of conservation in “Whale Meat Again” and an anti-drug tribute to a dead friend in “Boy With A Problem.”

If one takes the connotations of the title The Contender and the chameleon-like ease with which he switches styles, one might walk away with the impression that Capaldi experiencing a creative identity crisis. He might not have achieved the commercial heights he was reaching for, but he did give the world a satisfying–albeit somewhat problematic–album.