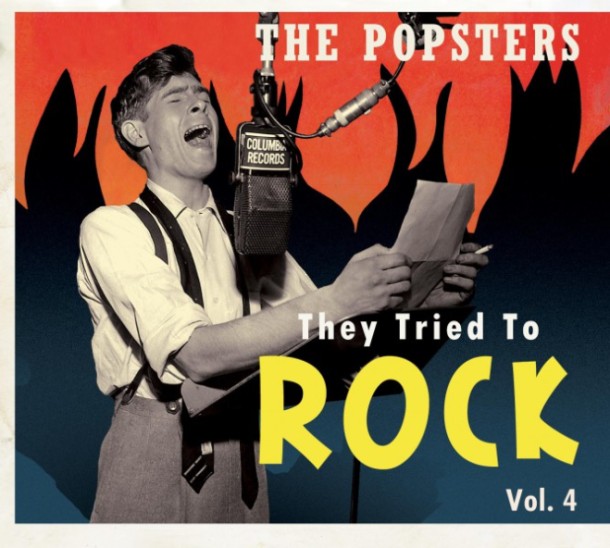 In the mid-1950s, record labels were in crisis mode. Big band and popular song records weren’t resonating with the youth of the day, who were flocking out in herds (and their parents’ hard-earned money) to see people like Elvis Presley, Little Richard, Fats Domino, and Jerry Lee Lewis. Rock and Roll had been born, and it was shaking the very foundation of the music business. Realizing that Rock And Roll—and its segregated cousin, Doo-Wop—was popular, it simply began doing what they’d done in the past: co-opt the trend by having their popular acts—as well as prefab acts designed solely for the teen market—cover these popular songs and record sides in this new trend. Furthermore, established songwriters would try to write hits that would cross over into the rock market. It was pure exploitation, plain and simple. But how good were these records? Well, that’s the genesis of the esteemed archival label Bear Family’s newest compilation series, They Tried To Rock.

Indeed, there are plenty of winsome moments here. The Diamonds’ “Why Do Fools Fall In Love” is marred by the fact that one expects to hear the timeless falsetto of Frankie Lymon, but instead one hears the song in a lower, flatter pitch performed by a very staid-sounding white-bread vocal group. Yet The Diamonds are a good example of just how effective a move the covers records could be. While Frankie Lymon’s version was a certifiable Billboard hit, and is a staple of oldies radio, The Diamonds’ version came out a mere week after Frankie Lymon’s version, and was equally as successful. Other moments of irksome attempts at co-opting hits are just as unnerving; Jim Lowe’s cover of Chuck Berry’s “Maybellene” was one of four different versions released during October 1955, and is generously called “mediocre.” it’s probably best that we not mention Johnnie Ray’s “Flip Flop and Fly,” Jerry Mercer’s “Blue Suede Shoes,” or, the nadir of the set, the otherwise wonderful Jo Stafford’s “I Got A Sweetie,” a rewrite of Ray Charles’ classic, “I Got A Woman.”

In documenting the “cover records” phenomenon, not everything is pure gold, but one must keep in mind that the executives understood the power of exploitation. Many of the names here are indeed well-established stars (Frank Sinatra, Perry Como, Billy Eckstine, Nat “King” Cole, Pearl Bailey) who would have to work rather hard to make a “bad” record. In only one instance does a performer sound completely out of character—Lawrence Welk—until one remembers that he was a variety act, and not simply the Nordic fellow with the bad suits and accordion, and it’s only because one doesn’t expect him to have performed rockabilly, with “Rock And Roll Ruby” being one of the highlights here. Nor should one miss out on Pearl Bailey’s fantastic “Can’t Rock And Roll To Save My Soul,” which is a pretty rocking little comedy number performed by a true legend.

Furthermore, a number of these songs were smash hits themselves; The Crew Cuts’ version of “Sh-Boom” was their biggest hit, a number one single, even as The Chords were on the charts with it as well. The McGuire Sisters’ version of “Sincerely” may not be as well remembered as The Moonglows’ version, but it was one of the trio’s biggest hits. Two of the songs here, Les Paul & Mary Ford’s “How High The Moon” and Louis Prima’s “Jump, Jive, and Wail” were not only big hits, but these crossover numbers are considered as part of the canon of rock and pop music.

You should not let the title of the series prejudice you. Bear Family has once again presented a worthy historical document; as always, there’s a ton of information to be found about each artist as well.  The sixty-six songs over the two volumes of They Tried To Rock may make for a hearty meal, but there’s plenty to enjoy, and it’s a delightful listen.