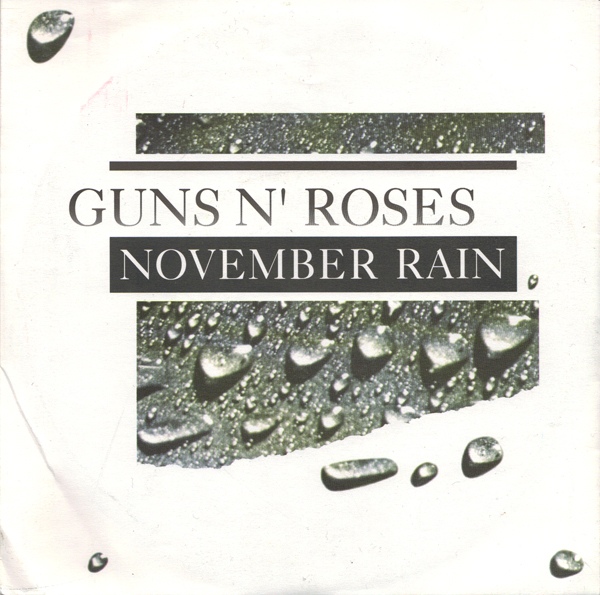 Back in April, we dedicated the month to songs about rain. One thing about that experiment was clear—there were way more song about rain than we’d expected. Because of the vast number of songs about precipitation, it was necessary to exclude some things. As that month was “April Rain,” and highlighted by a song from Living Colour frontman Corey Glover’s solo album, then what better song than this to provide a namesake for this month’s subject?

If you are going to say farewell to your career, you might as well go out with an epic, and that’s exactly what Guns N’Roses did. The sprawling, two-volume Use Your Illusion was big—big songs, big arrangements, big egos, big solos—its sheer weight alone was enough to buckle the knees of many veteran bands—-Tusk, anyone? Forgotten, though, is that while Use Your Illusion  and its subsequent promotion would ostensibly bring down G n’ R, it was only the band’s second proper studio album.

The album’s highlight—and indeed the band’s last hit single—was the mighty nine-minute power ballad, “November Rain.” Lambasted by the hardcore metal fans as ‘pussy shit’ because it was a ballad, such criticism was short-sighted, for on many levels, it was the band’s masterpiece. On all fronts was it great—Axl Rose’s lyrics are deeply introspective, and his singing voice perfectly delivers the emotions of the song, while the orchestral arrangement fills out the song, giving it a feel that only The Polyphonic Spree has ever been able to muster, and to top it off, it contains one of Slash’s most powerful, heartbreaking guitar solos. To go with such an epic song, the band needed an equally epic video, and they didn’t disappoint there, either. Even more surprising was the warming embrace given to it by rock radio, who played it in its full nine-minute glory.

Such a grand statement would make it difficult for a band to top, and so far, they haven’t. The band would implode on their lengthy, years-long Use Your Illusion tour, fragmenting as a result of drug abuse, ego, mental health issues, and acrimony that sadly lives on, nearly twenty-five years later. Axl’s music is still controversial and divisive—such criticisms are not unwarranted—but one should not deny that even a bad boy like Axl Rose can birth one helluva beautiful song.