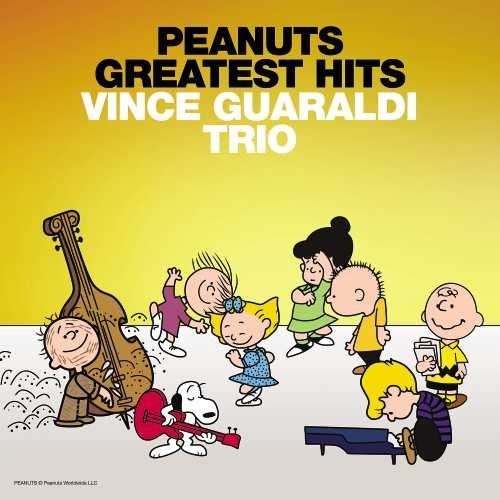 It’s that time of year again–kids are dressing up in costumes, bundling up in warmer clothing, enjoying the autumnal spirit, and watching the traditional airings of the various Peanuts specials. What these kids aren’t realizing, of course, is that what they’re also getting is a rather fine introduction to the world of jazz, courtesy of Vince Guaraldi, a California-based pianist whose had been the pianist for Cal Tjader, and whose own musical style was very much in the tradition of Dave Brubeck. His career spawned one hit, “Cast Your Fate To The Wind,” which led to an introduction to Peanuts producer Lee Mendelson, who had heard the song on the radio and invited Guaraldi to compose music for the show. Guaraldi, a fan of the comic strip, quickly took up the offer, and would soundtrack well over a dozen specials.

Peanuts Greatest Hits, then, is a very brief overview of that vast collection of material; at forty minutes, it’s just a little bit longer than a Charlie Brown special, but listening to it gives one that same warm and fuzzy feeling that one gets watching the antics of the hapless Charlie Brown, the bratty Lucy van Pelt and her philosophical baby brother Linus, and, of course, Snoopy. You’ll recognize the songs immediately, even if you never really knew their official titles; the shuffle of “Linus and Lucy” is the lede for every special, of course, while the jaunty “Charlie Brown Theme” and “Oh, Good Grief!” both serve as light tones over some of the more neurotic moments and musings of Charlie Brown. Then there are the holiday songs; “Christmas Time Is Here,” both in its gentle instrumental recitation and the children’s choral version, are Christmas staples, as is the snowflake-fluttery “Skating.”

It’s probably not an unrealistic statement to make, but if you’re of a certain age, then you know all of the songs on Peanuts Greatest Hits, and this collection further proves the point, as it warms the heart and triggers the memories of those beloved specials. Like an old friend, the music of Guaraldi’s appearance during the holidays is always welcome, as is this brief but oh-so-meaningful compendium of the classic sounds from your childhood.