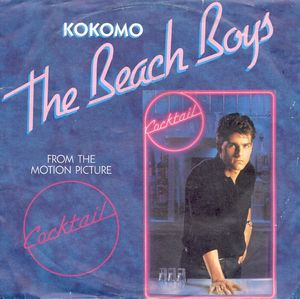 Not going to lie: I adore this song. Yeah, yeah, there’s the “story” about it, and there’s the issue of the relationship between Brian and the band, but there are always two sides of the story, and just because one side elicits sympathy, doesn’t mean that the offended party is in the right, you know? Personally, I think that someone protested a bit too much after it became a hit. Cocktail was a dumb-fun movie, but “Kokomo” was something truly special. It would be the Beach Boys’ last number one hit…and their first number one hit song to not include Brian.

It’s hated by Beach Boys fans, but I don’t care. It was good to hear it on the radio back in 1988, as I’d been a lifelong Beach Boys fan. I dare say that the song the hardcore hate so much is probably the one thing that brought them into the spotlight for Gen-Xers. But enough about that; it’s simply a lovely little tune with the killer harmonies that the band always had.

Besides, didn’t the Beach Boys start out with the intention of singing songs about the surf and the sun and the girls and the fun???

We’re taking our summer break a few days early, but why don’t you spend time in our vast index of reviews, interviews, and other gloriously wonderful songs of the day? And as you’re doing that, why not consider throwin’ a shekel or two in the ol’ Patreon Tip Jar? Your support is more necessary than ever, as we bring you content about artist and musicians you actually want to read about!