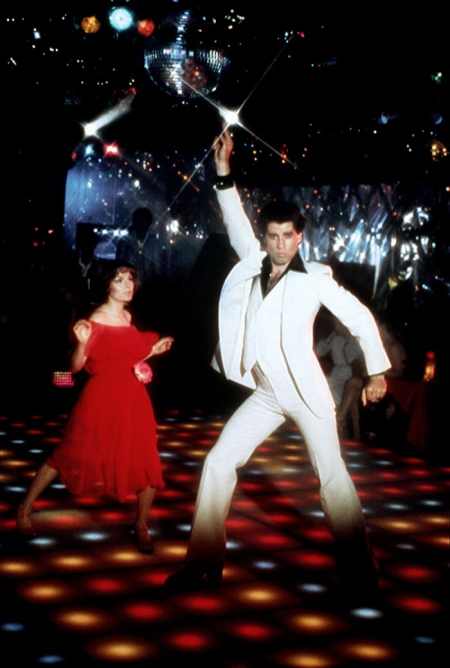 The 1977 film Saturday Night Fever was more than just a movie––it was a cultural phenomenon. It made John Travolta a superstar, it made the Bee Gees one of the biggest bands of the decade, it made disco the trend of the era, and it made its producers money. A lot of money. Tomorrow evening  (8 PM EST/6 PM PST), Reelz will premiere Saturday Night Fever: The Ultimate Disco Movie, a two-hour documentary exploring the creation of this iconic work.

When you look at the history of the film, it’s amazing that such a record breaking blockbuster even came to be. Based on a New Yorkmagazine expose about New York nightlife that would later proved to be completely fictional, impresario Robert Stigwood saw this as an opportunity to cash in on the burgeoning disco scene, to promote his clients,  and to work with a young John Travolta. Initially hiring John Avildsen as director, Stigwood soon fired him when he wanted to completely overhaul the character of Tony Manero,  to make him less sleazy and more likable. He was replaced with John Badham, and soon began filming on an extremely modest budget. Along with the major issues, other headaches came up. ranging from mafia interference, copyright refusals, location expenses, and wardrobe problems. By the time filming wrapped up, the three million dollars it cost meant the film came in way over the budget, and some in the industry expected this film to be such a commercial flop that would never recoup its budget.

How wrong they were.

Saturday Night Fever: The Ultimate Disco Movie takes an in-depth look into the making of this classic film, offering interviews and commentary from all of the surviving players, giving a rare look behind the scenes offering information the casual fan might not know. For instance, we learn that the iconic disco dancing scene with the classic Bee Gees tune “You Should Be Dancing” was originally choreographed to the Boz Scaggs hit “Lido Shuffle,” but his people declined theor request to use the song in the film—a decision that, by year’s end, would deny him an estimated three million dollars windfall. In that same dancing scene, Travolta initially wanted to wear a black suit with a white shirt, as he had seen a real life Tony–like character dressed that way in a real disco and thought it looked debonair. Furthermore, the classic tango scene was not initially scripted as such; it was improvised when the choreographer was away and they were unsure of what kind of dance to do in the scene.

All told,  the little movie no one expected much out of––Travolta even going so far as to saying that  during the creation he thought of it is nothing more than a little art film—would earn $350 million, becoming one of the most commercially successful film of all time, making its soundtrack become one of the best selling albums of all time, establishing both the Bee Gees and John Travolta as superstars, and for better or worse helping to define the that was the late 1970s.