Home › Song Of The Day › Black History Month › William DeVaughn, “Be Thankful For What You Got”

William DeVaughn, “Be Thankful For What You Got” 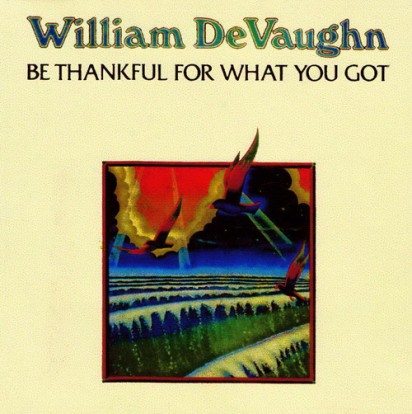 There’s no story more compelling than that William DeVaughn‘s “Be Thankful For What You Got.” DeVaughn was a Philadelphia area government employee who liked to sing and write songs in his spare time. He never considered himself to be a proper musician, but after months of saving up, he entered into a local studio operated by members of the MFSB collective. They fell in love with the song, and offered to help him out in terms of production and arrangement. Much to his surprise, the fruits of their labor resulted in a number one single on the R&B chart, and, more impressively, reached number four on the regular Billboard singles chart, ultimately selling more than two million copies. Yet even though he had his big break, he never felt suited to be an R&B star, and quickly returned to private life, only appearing every now and then whenever the fancy struck. He would release only one more album, 1980, with a re-recorded version of his hit. But the song has lived on, thanks to its sunny and optimistic nature, appearing in numerous hip-hop songs, most notably NWA‘s “Gangster Gangster.” Even though his career was short-lived, he did gThrace the world with one of the best R&B songs of the 1970s.