Home › Album Reviews › Soul Asylum: While You Were Out/Clam Dip & Other Delights (Omnivore)

Soul Asylum: While You Were Out/Clam Dip & Other Delights (Omnivore) 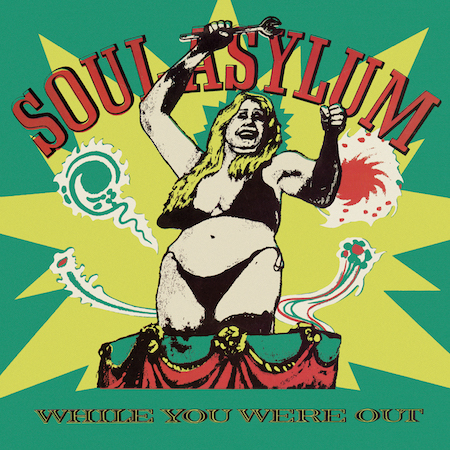 When Soul Asylum released their third album, While You Were Out, it was clear let the young Minneapolis band had hit a growth spurt. Their first two albums, while offering glimpses of originality, ultimately sounded like a young Midwestern punk band with no particular distinguishing features. That’s not meant to be dismissive; it is simply a truth of any musical scene that some bands are more derivative than others. In the meantime, they had toured the United States several times, crammed in tiny vans, playing small shows, and paying their dues. While You Were Out definitely shows a marked improvement in almost every possible way,  and it is a quite exciting hint of greatness to come.

From the gut–punching get go of ”Freaks,” it’s clear that this young band had finally found their sound. Over the next ten songs and thirty minutes, they offer a relentless thrash of Midwestern punk that is accentuated by Dave Pirner’s rugged yet sweet singing voice. It’s hard to deny the appeal of the crushing power of “The Judge” and “Closer To The Stars,” while the midtempo of “No Man’s Land” eschewed the punk in favor of a more compelling melodicism that in retrospect offers a very small hint of what was to come—a  major-label record deal with A&M. Soul Asylum had always suffered for sonic comparison to local contemporaries Husker Du and The Replacements,  but While You Were Out  marked their arrival at a sound that was truly their own,  and now they were given the opportunity to share it with the wider world.

in 1989, Twin/Tone released an EP of outtakes and covers entitled Clam Dip And Other Delights.  The cover featured bassist Karl Mueller humorously re-creating A&M Records’ most famous artwork, Herb Alpert and the Tijuana Brass’s Whipped Cream And Other Delights. The original songs are of a piece with while you were out, while covers of Journey’s “Juke Box Hero” and Janis Joplin’s “Move Over”—originally only on the British edition of the EP, but added here to offer a complete version of the release–highlight the band’s love of classic rock. It was a lighthearted release that captured the humor of the band.

Unfortunately, the sunny optimism with which the band launched their major-label career soon dissipated, and although their two albums for A&M were excellent, label mismanagement and indifference would leave the band battered and broken, Although the promise of greatness While You Were Out offered felt squandered, no one could have expected that their disappointments with A&M would soon set the stage for a truly surprising Cinderella story.…