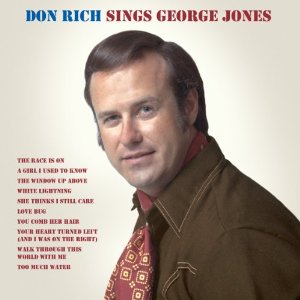 Today sees the release of one of country music’s Holy Grails–the only known solo album by Don Rich. Who was he, you might ask? Rich was the creative partner of Buck Owens‘ backing band, The Buckaroos, from 1960 to the time of his fatal motorcycle accident in 1974. Dead at the young age of 32, Rich never had the chance to fully express himself creatively as a solo act.

He was a superb guitarist, and with Owens’ role on the show Hee Haw, he was a young man whose star was indeed on the rise. Rich had taken the vocalist turn on a number of the Buckaroos’ albums, and with him having the occasional vocalist spot live on television, it would have been unsurprising for Rich to seek out the opportunity to be a solo act as well. Nor is it surprising that Rich’s first album would be a collection of George Jones covers.

In the archival process, the songs have been left alone, leaving these songs in the same condition Rich left behind. There’s a rawness to the songs, thanks to the decision to use an eight-track recording setup, which suits the songs quite well. As to why these records have been lost…who knows? They weren’t found until last year, when they accidentally turned up in a vault search.

As one might expect, the songs selections included a mixture of Jones’ hits, tempered with lesser-known songs as well. His take on familiar numbers like “She Thinks I Still Care,” “The Race is On,” and “White Lightning” may not reach the level of the by-now-standard versions by Jones, but they’re still excellent renditions. Lesser-known songs, such as “Too Much Water” and “Love Bug,” fare better, as they don’t have the specter of familiarity hanging over them.

As a point to mention–and to make the album not feel so slight–four Buck Owens-sung Hee Haw recordings have been added to the collection, all of which feature Don Rich. They’re slightly redundant, as two songs, “The Race is On” and “Too Much Water” appear twice, and don’t necessarily add anything to the collection, but they do feature Rich and Owens together.

Don Rich’s death was hard on Owens, who, as legend has it, had a premonition of his death the night before it happened, shortly after a taping session. So lost in grief was Owens that in later years he would state that he nearly quit making music as a result. While 43 years may be a long-time-coming for a debut, these ten songs were indeed a promising start, and would have made a fine introduction to a lost talent.