Lost Singles: The Fun & Games “The Grooviest Girl In The World” c/w “It Must Have Been the Wind” 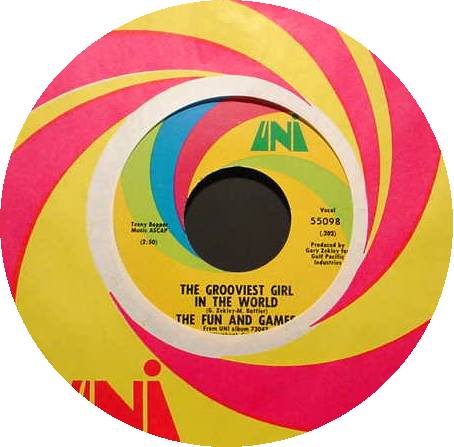 One of the enjoyable developments in rock music in the late 1960s was the rise of bubblegum pop. What made this development even more interesting is how it blended with the burgeoning psych-rock scene as well. While the genre would produce its fair amount of cheese, some true gems can be found.

One such jewel to be had is that of The Fun & Games (or The Fun & Games Commission), a combo from the Houston, Texas area. Though they only released one album, Elephant Candy, was produced by the legendary psych-pop producer Gary Zekley. Zekley also wrote their signature hit, “The Grooviest Girl In The World.” It’s a wonderfully upbeat number, propelled by “sha la la” harmonies and an utterly hummable melody.

In its own way, the song feels like a predecessor to the up-and-coming Power Pop genre.

The single’s b-side “It Must Have Been the Wind,” is an organ-driven number, nowhere near as catchy as its b-side, but a song that still possesses many charms, most notably the harmonies. It’s a bit more blues-laden, similar in nature to The Grassroots.

Though they would only shine brightly for a few months in 1968, time has not diminished the beauty and the pleasure found in this little slab of vinyl.

« The Recoup: First Review + Goodies!
A Memento from 40 Years Ago »