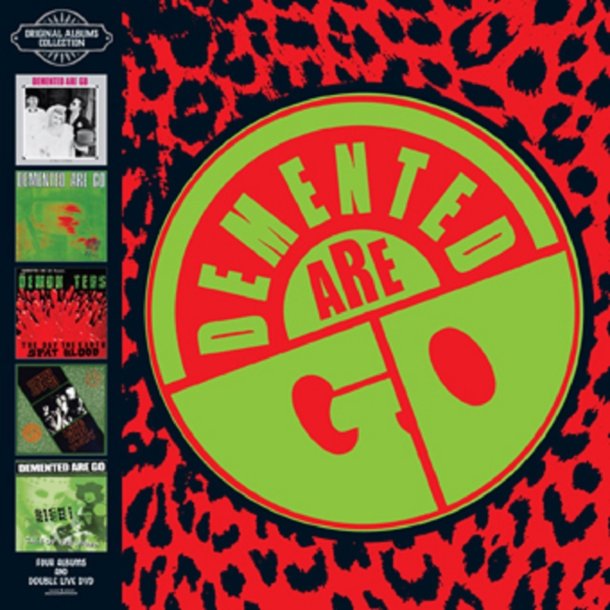 Gotta love the psychobilly scene! It’s a blend of punk rock, country, surf music,rockabilly, mystery novels, large breasts, Elvis worship, death, and Tom Waits appreciation. It’s insanity personified, and the more over-the-top the band, the better. None have ever done it finer, though, than Welsh band Demented Are Go, who have been doing their thing since the early 1980s.

It’s hard not to fall in love with Demented Are Go, and its insane frontman, Mark Phillips. This entry in Cherry Red’s Original Album Series compiles four of the band’s records—two albums, a mini-album, a live album, and two live videos, all of which cover the band’s first decade—and it gives you a fine taste of the band’s best work.

First up is the band’s wonderfully demented debut album, In Sickness and In Health. Kicking off with a version of Gene Vincent’s classic “Be Bop A Lula,” the band set the course for the rest of their career; other demented classics include “Holy Hack Jack,” “Transvestite Blues,” and “Pervy In The Park,” all four of which have become permanent residents in the band’s live setlists—and all of which appear at least once in the live offerings found here. As based in traditional rock music as they might have been, In Sickness still sounds like nothing that came before it; not even The Cramps would come close to these boys’ levels of dementia.

1988’s Kicked Out of Hell finds the band changing its lineup but not its sound; the recordings are tighter and harder, but virtually the same as before, albeit with a sound that’s less crunchy punk and more of an unrelenting hard rock juggernaut. Numbers like “Call of the Wired,” “Satan’s Rejects,” and “Surf Ride to Oblivion” are highlights here among a record that’s a start to finish head-kick of a record. The following year’s offering, the mini-album The Day The Earth Spat Blood, is more of the same thrashing, pounding psychobilly of the finest order.

These studio albums are great, but they really came to life onstage, and that’s what the remaining parts of this set highlight. Live album Live and Rockin’ finds the band in fine form, delivering a nice variety of songs from their career thus far, though it takes the DVD’s two concerts, 1987’s Sick! Sick! Sick!, and 1994’s Call Of The Wired, to fully capture the band at its peak. They’re as much a visual band; the 1987 set captures them in their wild hair days, while the 1994 set finds them dressed up like various notorious killers from famous slasher films.

While times and tastes may have changed, it’s good to know that Demented Are Go are still out there, making music, and being utterly insane on stage. This Original Album Series edition helps to fill in the gaps for the Demented place in your heart that you didn’t know you had. Enjoy at your own peril!