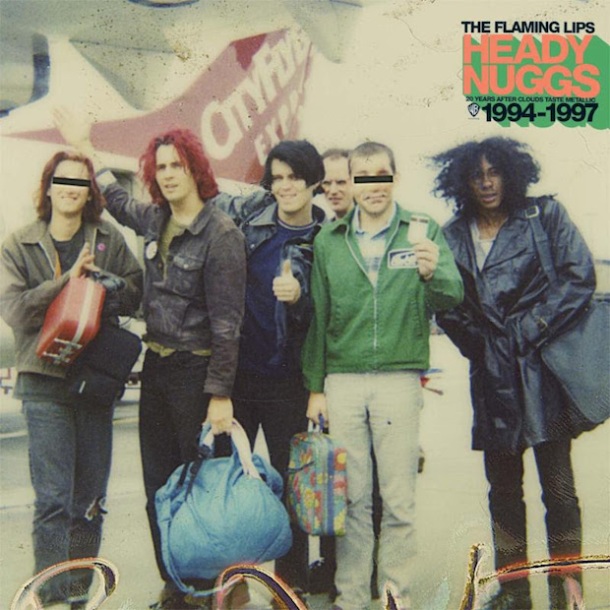 One of the more incongruous results of the early 1990s Alt.Rock gold rush was Warner Brothers signing Oklahoma-based psych-rock weirdos The Flaming Lips. Even more surprising was 1993s unexpected “hit” single “She Don’t Use Jelly,” which went to #9 on the Billboard Modern Rock charts. This success is even more surprising  when one considers how little the band’s sound actually changed, So here was a weirdo band, led by the enigmatic ringleader Wayne Coyne, making weird and uncompromising music, and being successful for just being themselves. Heady Nuggs: 20 Years of Clouds Taste Metallic is an expansive look at the era that resulted in that quiet masterpiece.

Having the taste of the blood of success on its tongue, it’s no surprise, then, that their follow-up album, Clouds Taste Metallic, is a bit more refined than its predecessor. They’re still weird, of course, but it’s obvious that they’ve spent a bit more time cleaning up and polishing their music. At the time, I likened it to a dude having a successful first date and then frantically cleaning his apartment up to impress the young woman who is coming over to hang out, and that’s a description I’m sticking with. It’s for the better, too, as Clouds Taste Metallic contains some of the band’s better numbers; “When You Smile” is a tender love ballad, while “Placebo Headwound,” “Guy Who Got A Headache And Saves The World,” and “Evil Will Prevail” show that even when they refined their sound, The Flaming Lips could still produce wonderfully weird songs.

Don’t be fooled, though, by Clouds Taste Metallic’s emphasis on short, concise pop songs—their sound may have been refined,  they really hadn’t changed at all. That’s the lesson one takes away from disc two, which combines the album-length EP Due To High Expectations…The Flaming Lips Are Providing Needles For Your Balloon (a snarky commentary on the band’s success) with an EP of outtakes and unreleased material, The King Bug Laughs. If Clouds is the sound of a guy cleaning up his apartment to impress, these EPs are the closet and under the bed where the dude shoved everything in a desperate measure to look tidy. Together, it’s a combination of interesting covers of songs by Smog (“Chosen One”), David Bowie (“Life On Mars”), Frank Sinatra (“It Was A Very Good Year”), John Lennon (“Nobody Told Me”), and Suicide (“Ice Drummer”), as well as rough outtakes and demos.  Sonic quality is varied, but never to the point where one won’t enjoy them.

The third disc of Heady Nuggs is a live show taken from a performance in Seattle. Though the sound is definitely of bootleg quality, the magic of the band’s performance shines through, especially on the extended versions of “When You Smile,” “Psychedelic Explorations of The Fetus With Needles,” and “The Abandoned Hospital Ship,” while the comedic hit “She Don’t Use Jelly” is transformed into something much more delicate and fragile. Though one misses out on the visual element of the band’s live show, the charm is definitely found here as well, and this show highlights just how much of an excellent live band the Flaming Lips had become.

Clouds Taste Metallic would be a transitional record, for sure. Shortly after the release of the album, hotshot guitarist Ronald Jones left the band, disappearing into the fog of mystery. The band would make a one-off sonic experiment, the ‘juke box’ record Zaireeka, before transforming into a band that was less noisy and weird and much more focused on melody, lyrics, and arrangement; The Soft Bulletin would be their masterpiece, even if it didn’t sound much like anything that came before it. Listening again to Clouds Taste Metallic after all these years, certain moments here and there prove that The Soft Bulletin wasn’t necessarily made in a vacuum. Heady Nuggs might be more oriented for the completist, and though it’s not a complete representation of the band during the era (a handful of awesome B-sides are missing, and probably should have been included over some of the lesser King Bug material), this is a fine encapsulation of an already damn good band in the metamorphosis stage of becoming something wonderful.