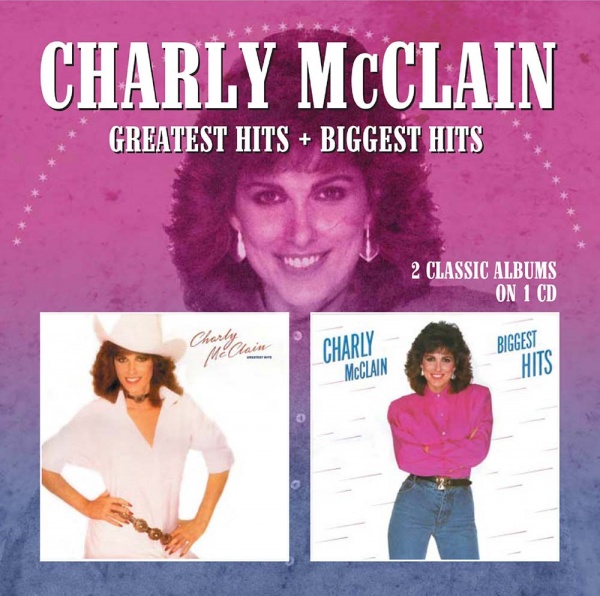 By all respects, Charly McClain should be considered a country superstar. She certainly built a legacy with her chart history; she had three song hit Number One, ten Top Ten songs, and a dozen or so more Top 40 hits to boot. Yet for all intents and purposes McClain is somewhat forgotten these days. This collection compiles two of her Greatest Hits records, and while they cover the majority of her career, what makes the collection unique is that the second hits collection came but three years after the previous one, and all of the songs on it save for one all charted after the first hits collection was released.

McClain began her recording career in 1977 at the age of 21, and brought it to an end eleven years later, retiring from music at the young age of thirty-two. She was an extremely prolific musician, releasing fifteen studio albums and forty singles in that relatively brief time. Her sound blended country and pop, established thanks to enduring upbeat numbers such as “Who’s Cheating Who?” and “Sleeping With The Radio On,” while her ballads would blend country twang and polished pop arrangements, as witnessed by “You’re A Part Of Me,”  “I’ll Love Away Your Troubles For A While,” and “The Very Best Is You.” That Greatest Hits came in 1982—just four years after she started having successful chart hits—might seem premature; after all, one doesn’t usually sum up one’s career in a definitive manner unless the artist changes labels or they stopped having charting hits—neither of which was true for McClain.

Biggest Hits, released in 1985, is slightly perplexing, as her career had far from dried up in the mere three years since her previous best-of. The songs offered here were all chart successes in the brief time between the records, and they highlight up a more pop-minded direction. The pop sweetness of “With You” recalls The Carpenters, while the upbeat “Sentimental Ol’ You” and “Fly Into Love” helped to usher in the redefining of the “country” sound that took place in the Eighties. Depending on your point of view, this is either a good thing or a bad thing; the quality of McClain’s songs make a case for this new direction. Her biggest hit, the 1983 “Paradise Tonight.” a catchy duet with Mickey Gilley that, alongside “Who’s Cheatin’ Who,” has proven to be one of the few songs that has endured for decades. Once again, this compilation seemed to be a bit premature; she was still having chart success at the time Biggest Hits appeared. True to form, she would release one more album for longtime label, Epic, until making the surprise move to Mercury and releasing her self-titled album in 1988.

And then, suddenly…her career was over. There would be no more Charly McClain music. She simply walked away from it all, and she’s stayed away, too; no new records, no videos, no acting performances, no interviews…nothing. She thoroughly and completely retired from the entertainment world; it’s been eighteen years since her last greatest hits package. The question one wants to ask is: why? Aside from the vague answer of spending time with her family, she’s never said—and may never say, at this rate. This twofer might not usher in a revival, but it does remind the world of just how talented Charly McClain was and how her shunning of the world feels like a tragedy.