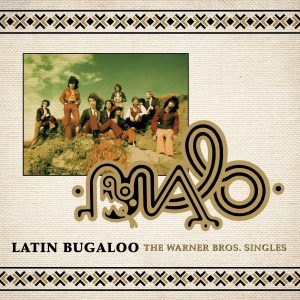 In the 1960s, no area was more fertile for psychedelic rock than San Francisco. Thanks to it being an international port of call, the city has always had an extremely diverse population and a blending of cultures from around the world. Naturally, this diversity showed up in the music scene, becoming a home for music ranging from rock’n roll, punk, folk, new age, and world music.  Malo arose from that scene as well, and have been well served by a new collection from Omnivore,  Latin Bugaloo: The Warner Brothers Singles.

Formed in the early 1970s by Arcelio Garcia and Jorge Santana, the band boasted well over half a dozen members initially and soon became a revolving and rather fluid collective of Latino musicians. This open door policy served them well, allowing them to  dip their hands into various styles with a diversity of musicians.   Live, they proved to be a powerhouse that could turn these songs into extended jams that seemed to go on forever in one magnificent groove. It was a winning combination, too; their first single, “Suavecito,” was an impressive out of the gate hit that appeared in 1972, a mellow number complete with gorgeous harmonies and a romantic evening vibe that still sounds fresh for decades later  It was a hell of an introduction, and their self-titled debut album subsequently reached the top 20 of the charts. Their second album, Dos, appeared later that year, offering another fine single, “Latin Bugaloo,” a fast dance number that offered a relentless and nonstop groove.

Yet none of the singles they released performed as well as their debut, but it wasn’t for lack of quality. On some levels, it seems rather ridiculous to have presented Malo as a singles band; they were a jam band, and while the unedited album versions––some of which were three times as long as their single edits were tailor-made for FM radio—their singles only told half of the story, and after the first album fans were more likely to ignore the singles and buy the album instead, It wasn’t for lack of quality, though; their third album, Evolution, offered up two of their finest songs, “I Don’t Know,” was a mellow R&B ballad with fine harmonies,  while the flip side, ”Merengue,” was an intensely compact balls to the wall dance number that seemed to go on forever. Alas, why would one bother to buy an edited version, when the album take was so much more exciting? Thus, the fatal flaw of Malo: a fantastic band hampered by the inability to sell singles, which limited their audience and made them difficult to promote.

Unfortunately, by the time of the fourth album, 1974’s Ascención, Warner Brothers has lost interest in promoting the group, and as a result, the band lost interest in themselves. It isn’t too surprising; on their final single for the label, “Love Will Survive,” the group sounds tired and uninspired, and while the flipside “Think About Love” is a bit more upbeat, it is definitely a more lackluster affair. Sadly, Malo called it a day and its members moved on other things. The following decade, they would reunite and have had an on/off but steady career since returning, one that has continued to this day. Latin Bugaloo offers a fine introduction to this obscure but extremely talented musical collective, one that is most worthy of rediscovery.