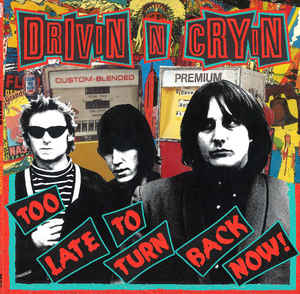 By 1996, Atlanta based rockers Drivin’ N Cryin’ has been through the ringer. Their decade-long run had been nothing if not confounding; they signs to a major-label fresh on the heels of a promising college rock debut album, but then radically switched their style to a more acoustic/folk-based rock. Their next album would be another stylistic turn,a country tinged Southern Rock album that is easily their masterpiece, but then they underwent another radical transition; they became a hard rock band that bordered on metal,  Much to everyone’s surprise, this new iteration actually spawned a hit single, “Fly Me Courageous.”  Unfortunately, this chameleon-like schizophrenic personality frustrated their label and did not help expand their audience. Throw in band member tensions, drug addictions, and financial and business woes, it’s amazing there even was a band left by 1996. After disappointments with two major labels, they signed to a small independent label, and soon came up with a self-titled album which they have remixed and remastered. renaming it Too Late To Turn Back Now!.

The new title is absolutely appropriate, as it captures the headspace the band was in at the time. Stripped down to a power trio of Kevn Kinney, Tim Nielsen, and drummer Jeff Sullivan, too late is the sound of a band down to brass tacks, hunkering again and doing what they do best––Southern rock’n roll with a hint of folk. Considering how they spent most of the decade as a metal band, with the departure of Van Buren Fowler it seemed a natural progression to get back to their roots. (heck, even the original album cover serves a stylistic not to their fantastic debut album, Scarred But Smarter.)

ButToo Late To Turn Back Now! should not be mistaken for a step back, though. This is DnC rocking out with their best foot forward, and even though in retrospect it marks the end of an era, you certainly couldn’t mistake it for a farewell album. Kinney’s first words on the album provide this reissue’s new title, but more than anything it feels like a statement of intent; through good times and bad, the band remains,  and what’s more they are doubling down on their existence. Interestingly enough, the album seems to be programmed in such a way where the first half of the album consists of hard rockers (“Driving,” if you will) any second half of the album to more introspective, country/folk fare. When they hit hard on “Roof Garden” and “Drivin’ N Cryin’,” it’s with all of the intensity one has come to expect from the band. When Kinney turn down the volume on “Everything’s Going To Be Alright” and “Beneath the Undertow,” he offers some of his most heartfelt numbers to date. Yet the album  concludes with a cover of a famous farewell song, John Denver’s hit for Peter, Paul, and Mary, “Leaving On A Jet Plane,” which provides a none too subtle cloud of doubt, and then gives way to the thrashing punk rock of “Nothing To Lose,” a sentiment that only seals the feeling that this is  some sort of final statement.

Thankfully, Too Late To Turn Back Now! was not the final word. Though they went their separate ways for a bit, they never really went away, playing occasionally over the years, returning in 2009 with a new album. Since then, they have maintained an under the radar existence and have garnered a reputation as a superb live band, and they finally earned those kudos and the respect that they deserved in their heyday.