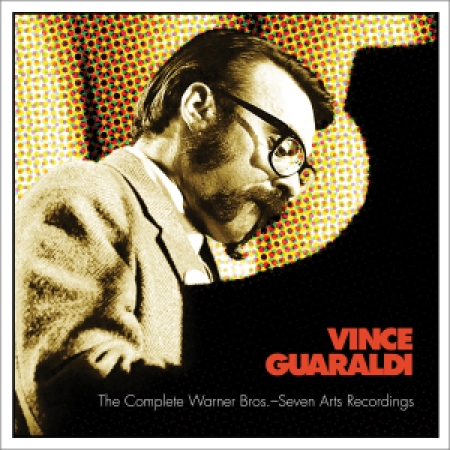 Vince Guaraldi’s legacy will forever be his brilliant and delightful compositions for the early Peanuts cartoon specials. Those songs capture the innocence of childhood through his innovative use of complex jazz structures in deceptively simple piano compositions. Yet his jazz career often takes second place to his soundtrack work, which is a shame as he was already quite accomplished before he went to work for Charles Schultz. He won a Grammy award for his beautiful instrumental, “Cast Your Fate To The Wind,” a delightful ballad that brought his distinctive sound to the world’s attention. Omnivore’s newest collection, The Complete Warner Bros.-Seven Arts Recordings compiles what would become his final releases in a life that would soon be cut short.

At the time, Guaraldi’s career was in transition.  Although he had steady work, he had been through the ringer with his former record label,Fantasy, having been embroiled in an ugly lawsuit. His cartoon soundtrack work was somewhat stifling, and he was feeling creatively ambitious, ready and willing to try new things.  He had become especially enamored with the rock’n roll scene in his hometown of San Francisco, often hanging out with the Grateful Dead and jamming with them led him to fall in love with the sound of the electric piano.

His first album for his new record label, Oh, Good Grief!,  appeared in 1968 and found him updating classic peanuts compositions with this new instrument. It is an interesting listen, an experiment that fits quite nicely in the era of Moog and synthesizer experiments from artists such as Wendy Carlos in examining classical and pop music with new and futuristic-sounding modern technologies. In modern times now, it’s hard to fully appreciate how different the versions of classic and beloved songs such as “Linus and Lucy” and “Peppermint Patty” might sound with a more electronic, somewhat robotic arrangement. Even so, the updated arrangements do not detract from the songs, as “Rain, Rain Go Away” and “Great Pumpkin Waltz” are still absolutely beautiful ballads. Unsurprisingly, even though he considered this album today an experiment and an exercise, it was a bit of a hit. But was it successful because of its sound, or because of the beloved nature of the content?

Guaraldi must have felt the latter, as what came next was a most ambitious project that unfortunately blew up in his face. Entitled The Eclectic Vince Guaraldi,  for this album he decided to go all out in terms of experimenting with arrangements and style. Because he was allowed to roam free, the album sessions soon delved into a more free form and somewhat self-indulgent path. While the songs retained the distinctive Guaraldi sound, hearing string and orchestra sections made the songs feel heavy and somewhat schmaltzy. “Nobody Else” opens the album, and it is jarring to hear a beautiful ballad drowned out by the sappiness. By no means is it a bad song, but the Easy Listening arrangement detracts. The arrangement works somewhat better on his version of ”Yesterday,” though, and his takes on pop numbers such as”the beat goes on” and a previously unreleased version of Burt Bacharach’s “Do You Know The Way To San Jose” are quite satisfying as well. Patience is definitely tried, though, when it comes to two covers of Tim Hardin songs; on “Black Sheep” and “Reason to Believe” he takes  a rare vocal turn, and his voice is something one either loves or hates. Personally, I love his gruff Tom Waits/Shel Silverstein vocal style, but I most certainly concede that it is definitely not for everyone. Unfortunately, the label didn’t care for it either, and the record was released with little press and even less enthusiasm.

The label reigned him in for his third and final release, Alma-Ville.  Guaraldi is back to his familiar sound, a light and fluffy jazz played on a regular piano and with a traditional jazz accompaniment. For all its esoteric and ambitious sounds and arrangements, his last album had been a step forward creatively; Alma–Ville unfortunately sounds like a creative step back, the sound of an artist’s creative wings being clipped for commercial purposes. The album isn’t terrible by any means; it simply sounds like a forced compromise from someone who could and wanted to do something more exciting. Yet what he offers in terms of Latin-inspired compositions such as “Uno Y Uno,” “Detained in San Ysidro,” and “Rio From The Air” do show that even in compromise, he could produce fantastic sounding music, and this was a promising direction. Yet even with these compromises, once again the label gave his record an extremely soft release and absolutely no promotion, choosing to wipe their hands of a brilliant musician at the end of their three record deal.

Sadly, Alma–Ville was to be his final statement. Frustrated and unable to secure a record deal, he spent the remainder of his life as a live performer, recording more soundtrack material, and banking on the goodwill his Peanuts compositions earned him. He would die suddenly in 1976, leaving behind a legacy of music forever linked to childhood and the innocence of youth. This collection shows that even  with such grand and eternal accolades, Guaraldi was so much more than a one trick pony.