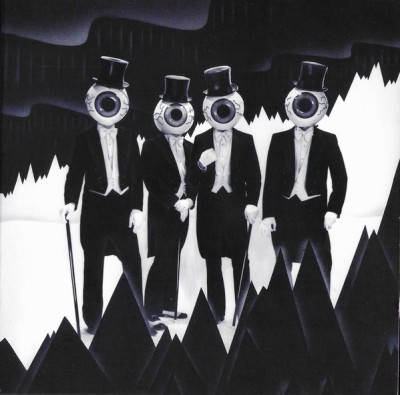 San Francisco experimentalists The Residents earned themselves a reputation for light hearted noise terror, cut-and-paste irreverence, and four top-hat wearing, tuxedo-clad giant head-sized eyeballs. They were as brilliant as they were confounding, reveling in their anonymity while intriguing the world with their unique sound. For their sixth album, the group set aside its more humorous elements and delved into a meticulous undertaking, resulting in Eskimo, a serious and unique record, even for them.

It was not an easy undertaking, however. Between internal struggles and professional conflicts, the making of Eskimo faced numerous delays, having being worked on for well over three years before seeing light of day. Eskimo  was created by nontraditional means, using field recordings, vocal intonations, and homemade instrumentation. It’s also a concept album about life inside a nomadic Eskimo tribe. Furthermore, Eskimo isn’t a funny record; their satirical, edgy sense of humor is nowhere to be found. (Sure, you could make a case that the chanting throughout it Is meant to be funny, but as it doesn’t differ terribly much from the real thing, laughing at a foreign language seems somewhat callous.)

Eskimo takes its cue from audio documentaries, and the one unifying thing throughout is the sound of a brisk northern wind. If you were to listen to the entirety of the suite without knowing otherwise, you would think you were listening to National Geographic or NPR. It’s seriously that good and that convincing. The collection begins with the sound of a walrus hunt and ends with a somber yet joyous death celebration and dance. Meticulously crafted and recorded, Eskimo is a serious work of art and evidence that the jokers who created it were no slouches. In the liner notes, you can see that this was a  redefining moment for the group, making the critics reevaluate their previous stance on the group as being something of a novelty.  The liner notes also indicate the seemingly unbelievable but absolutely true fact that Eskimo was shortlisted for a Grammy award.

This edition of Eskimo has been expanded and remastered as part of an ongoing campaign to reissue The Residents’ back catalogue. As such, the first disc contains over thirty minutes of exploratory conceptualizations called “Eskimo.” They are long, improvisational pieces, and you can hear the idea being born as you listen through them. The second disc contains a handful of unreleased tracks similar in nature to the ambient style found on Eskimo; with titles such as” Kenya,” ”Middle East Dance,” and “Scottish Rhapsody,” one wonders if perhaps they were toying around with other locations to explore. Also included is a single that was released around the same time entitled “Diskomo,” which was a dance single inspired somewhat by Stars On 45  and is a medley of tracks from Eskimo and defies easy description. The set also contains b-sides to the single, the groups contribution to a Ralph Records  label compilation, and live recordings and recreations of Eskimo tracks.

Eskimo is the sound of a band becoming a true artistic force, and it’s a testament to the superior quality of the final results that the album still sounds absolutely innovative 40 years later. After such a creative endeavor, the stakes would be high as the world waited to see what they would do next. Thankfully, they didn’t disappoint…

« Song Of The Day: Royal Trux, “Year Of The Dog”
George Walker: Lilacs For Voice And Orchestra »