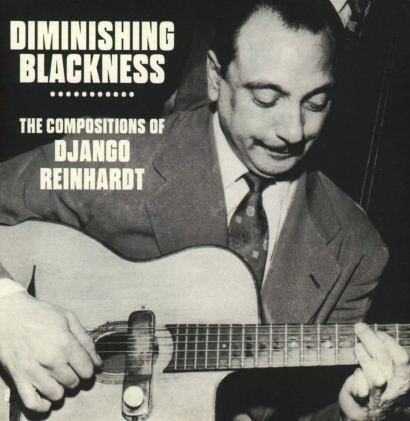 Belgian Gypsy guitarist Django Reinhardtis credited as one of the innovators of the jazz guitar, and rightly so. Until he appeared on the scene, the guitar had largely been an auxiliary jazz instrument, never appearing at the forefront. Diminishing Blackness: The Compositions Of Django Reinhardt, a new three CD collection from él Records, celebrates the relatively brief but highly influential career of the young virtuoso by offering a career retrospective as well as bonus tracks highlighting the influence he had on other musicians.

Born in 1910 to Gypsy entertainers, young Django was exposed to the music of his culture from a very early age. He soon began playing the guitar, yet a freak accident when he was 17 nearly cost him his life and left him permanently disabled in one hand. Losing the use of two of his fingers should has been the end of his guitar playing career, but he was undaunted; he became determined to play again, and over the next two years he practiced rigorously and became a masterful performer. He began performing in Paris and throughout France, and in the early 1930s formed the Hot Club Quintet, which featured to him, his brother Joseph, and violinist Stephane Grappelli. Grappelli provided a key component to his early music; on many recordings, Grappelli takes lead of the songs, allowing Django to have a more subtle and nuanced approach, while on other songs, the violin adds a depth to Reinhardt’s lead. Unsurprisingly, his band began to catch the eye of American jazz musicians who were playing in Paris such as Coleman Hawkins, Louis Armstrong, and Benny Goodman.

The advent of World War II would lead to a major shift in Reinhardt’s band. The band was touring England when the war broke out, and Django made a rather risky decision to return to France; Nazi occupation was sure to happen, and the Nazi government was hostile to both gypsies and jazz musicians. Grappelli and the group decided to stay in Britain, and it would be six years before the duo would perform together again. He formed a new combo and continued to play and record,  albeit somewhat haphazardly out of self-preservation, with him exploring more classical themes and styles. When the war ended, he reunited with Grappelli and soon began to rebuild his jazz career, which would include a promising but ultimately unfruitful collaboration and tour of the United States with the Duke Ellington orchestra.

As he entered the 1950s, Django Reinhardt seemed to lose interest in his music career, preferring instead to focus on his painting and Bohemian lifestyle. He erroneously believed that his music was passé, mistaking a career lull for something more permanent. In fact, his career was about to gain a second wind, when American jazz impresario and label owner Norman Granz took an interest in him.  Listening to his last recordings shows that his sound was maturing, thanks in part to his increased use of electric guitar,  and the cool jazz arrangements placed him nicely alongside such talents as Modern Jazz Quartet and Wes Montgomery. Furthermore, interest in jazz music—which he felt had passed him by–meant his profile was on the rise in the United States. Granz had scheduled Django as part of his famous international Jazz At The Philharmonic package tour. Tragically, those plans never came to fruition, as Reinhardt died of a sudden brain hemorrhage at the young age of 43.

Although his reputation definitely grew posthumously, his loss was felt in the jazz world. The bulk of the third disc in this set is dedicated to tributes to and covers of Reinhardt’s most beloved composition, “Nuages,” is offered in four different arrangements, each version offering a unique and original interpretation of the original. Also excellent is Modern Jazz Quartet’s tribute and subsequently one of their signature compositions,”Django,” while Chet Atkins’version of  “Django’s Castle” shows how Reinhardt’s  influence on guitar playing was felt beyond the jazz world.

Django Reinhardt’s legacy to the music world is one that cannot be denied,  and Diminishing Blackness serves as an excellent primer for those interested in this most unique figure. At nearly four hours, it’s a deep and delightful trip into gorgeous jazz, and it’s hard not to be invigorated after diving into its depths.