Song Of The Day: Purple Mountains, “All My Happiness Is Gone” 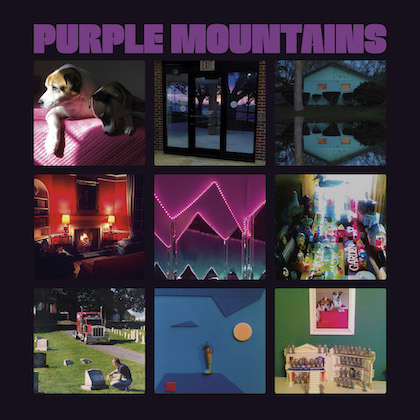 Wow, David Berman is back, and boy, is he back! We took him at his word when he put his previous band Silver Jews out to pasture and that he was hanging up his boots, to enjoy a gentrified retirement. Well, ten years later, he’s back in the saddle with a fantastic new single under the moniker Purple Mountains. The song gets off to a rather slow start–hey, after ten years, what’s two more minutes? But when it kicks in…man, it really kicks in, making for one hell of a comeback. Drag City will be bringing the world their self-titled debut album in July, and all we can say is…bring it on.

But let’s be real, shall we? This is easily one of the best songs of the year, and it is definitely one of the BEST EVER songs about major depression. it’s certainly the best song in AGES to capture what deep depression feels like. The video is even more effective; if you have ever suffered the real thing–not “the blues” that lasts a weekend and a bender that normies think is “depression,” we’re talking about the go to bed one night and when you finally get out of bed it’s three months later and you’ve no idea where the time went–then the minute you lock eyes with Berman, you know. You know he knows. And there’s something so reassuring in finding a fellow sufferer and hearing what you feel captured so brilliantly in song.

But make no mistake: “All My Happiness Is Gone” isn’t a miserable song; if anything, it’s quite upbeat, and in its upbeatness comes a matter-of-factness that makes it even more real. it’s not sad, it’s not depressing, it’s just…well, here it is. this is how it is. take it or leave it. if you get it, good for you. if you don’t get it, you’ll never get it, so just move on, okay?

you simply say how it is.
and you get on with it.

Friends are warmer than gold when you’re old
And keeping them is harder than you might suppose
Lately, I tend to make strangers wherever I go
Some of them were once people I was happy to know

Mounting mileage on the dash
Double darkness falling fast
I keep stressing, pressing on
Way deep down at some substratum
Feels like something really wrong has happened
And I confess I’m barely hanging on

Ten thousand afternoons ago
All my happiness just overflowed
That was life at first and goal to go
Me and you and us and them
And all those people way back when
All our hardships were just yardsticks then, you know
You know

Not the purple hills
It’s not the silver lake
It’s not the snowcloud shadowed interstates
It’s not the icy bike chain rain of Portland, Oregon
Where nothing’s wrong and no one’s asking
But the fear’s so strong it leaves you gasping
No way to last out here like this for long