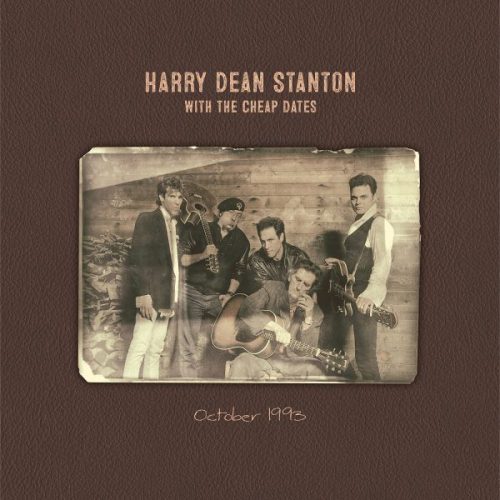 Harry Dean Stanton earned his reputation as one of Hollywood’’s finest character actors. Stanton was also quite a character. He was also a musician. But he never really pursued a singing career. Why? Well, when you work as damned hard as he did, you simply don’t have the time!  So the few glimpses of Stanton’s musical output take on a rare jewel quality. October 1993, a new compilation credited to Harry Dean Stanton & The Cheap Dates, offers a scrapbook of the rare moment in time Stanton indulged his musical side.

October 1993 contains both studio recordings and live tracks. The Cheap Dates consisted of longterm musical collaborator Jamie James, with Jeff “Skunk” Baxter (The Doobie Brothers), Slim Jim Phantom (Stray Cats), and Tony Sales (Tin Machine). Their musical background gives Stanton the rootsy/rockabilly accompaniment the songs need. Stanton himself sings like an angel—whether on the side of good or evil is your call to make—and his smooth style is enhanced by age and experience.

Just listen to the opening track—a studio recording of Bob Dylan’s “I’ll Be Your Baby Tonight,” performed with a sweetness so heartfelt, it might make you forget all of his previous transgressions. His take on Chuck Berry’s “Promised Land” channels the later Elvis Presley rendition and is a superb rocker. The balladry of William Bell’s “You Don’t Miss Your Water” and John Hiatt’s “Across The Borderline” offer pleasing performances. Both were released on a now extremely rare seven inch single.

But the live performance that concludes October 1993 makes this a special little release. Recorded at The Troubadour, it highlights how tight of a band Stanton had. Kicking off with one Chuck Berry’s “You Never Can Tell,” one naturally might associate it with its famous appearance in Pulp Fiction—until one realizes that this recording predates the film by nearly a year. Stanton’s performance of Lieber/Stoller classic “Spanish Harlem” sounds as if he’s been performing it all his life. “Miss Froggie” is a raucous rocker, while his version of Jerry Reed’s “Bright Lights, Big City” delights. The set concludes with Mexican folk song “Canción Mixteca,” which Stanton sang in the film Paris, Texas. It was the closest thing to a “hit” Stanton ever had, and one can find numerous videos of him performing it on YouTube.

Roger Ebert once stated that no movie could ever be bad if it had Harry Dean Stanton in it. He wasn’t wrong. Stanton’s rare musical excursions offer nary a bum note. Hell, even his performance on the Care Bears soundtrack is superb!  October 1993 documents a brief moment in time for one of America’s finest actors, and a fine collection of music.