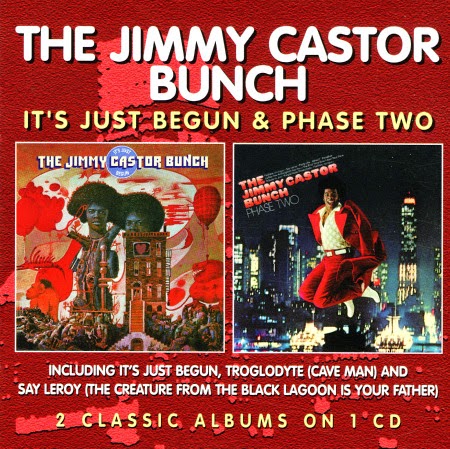 You just gotta love a guy who buys back his album and then walks across the street to a competing record label, and when it is released, the once-rejected record is a massive success. That’s the case of Jimmy Castor, who signed to Columbia, and when he turned in his debut album, It’s Just Begun, discovered that his label was no longer interested in it or in him.

To be fair, it’s not hard to understand the label’s reticence. It’s Just Begun is a record that slips from funky novelty tracks like “Troglodyte (Cave Man)” (which would become a hit single) and “L.T.D. (Love, Truth, & Death),” to funky roots-rock numbers like the Santana-like title track, and even the incongruous soul ballads like “Psyche” and “I Promise To Remember.” Not that any of it is bad, it just feels somewhat schizophrenic. Castor’s voice is compelling and sweet, and his backing band is tight.

Album number two, entitled appropriately Phase Two, is much more of the same, though not as schizo as its predecessor. Capitalizing on the prehistoric man motif,  “Luther the Anthropoid Man (Ape Man)” is merely ok, as is “Say Leroy.” Both songs help obscure the superb moments found here, such as “Paradise” and a drop-dead gorgeous version of “First Time Ever I Saw Your Face.” The fun funk of “Party Life” and “When?” show him to be a burgeoning master of party funk, while quietly sneaking in some pretty blunt social commentary.

These albums may have been somewhat scattered stylistically, but they proved an auspicious start. Castor would go on to record more albums, both with Jimmy Castor Bunch and as a solo act. He would pass away in 2012, but left behind a legacy of superior records.