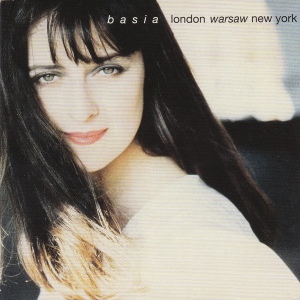 London Warsaw New York, British-based Polish jazz vocalist Basia‘s sophomore album, was a watershed release for the singer. Her debut album, Time and Tide, was warmly received critically and was moderately successful in America, going to number one on the Contemporary Jazz charts. Moving quickly to capitalize on Time and Tide‘s unexpected success, Basia and company went back into the studio and recorded its follow-up.

Basia’s power has always been in her voice–husky but never overbearing, light and airy but still retaining a strength that keeps her from becoming too ethereal, and the sly Latin groove of opening number “Cruising For Bruising” is instantly appealing. Released as the album’s second single,it would become the album’s most successful number, reaching #5 on the Adult Contemporary charts in America. Also charting was the easy listening groove of “Baby You’re Mine,” and a upbeat cover of Stevie Wonder‘s “Until You Come Back To Me (That’s What I’m Going To Do)” was a minor hit as well. But London Warsaw New York‘s album tracks were equally superior, from the jaunty “Baby Hold On” and “Copernicus” and the pop groove of “Ordinary People” to the powerful balladry of the title track, Basia’s voice draws the listener in with her siren song, and never fails to please and excite the ears.

This deluxe reissue expands London Warsaw New York into a double-disc set, and these bonus tracks make an already great record even more special. The two b-sides, “Come To Me” and “Masquerade” are no mere toss-offs or lesser material, and could easily have been singles as well. Thankfully, Basia did not overdo herself with remixes, which makes the reimagining of the album’s three singles an interesting diversion. Alternate versions don’t differ too radically from the originals, and are enjoyable as well, but it’s the instrumental version of the album that really makes this expanded edition quite special. Stripped of Basia’s voice, one can hear that it wasn’t just the singer who made London Warsaw New York a delightful album; her backing band (featuring Matt Bianco collaborator Danny White) are master tunesmiths, and it not a stretch to imagine that had this version of the album been released, it would have been successful as well. (There’s a reason White was featured on the back of London Warsaw New York‘s cover, and the detailed liner notes discuss the importance of his contributions and explain why he never received the equal billing he deserved.)

London Warsaw New York would go platinum in America, and would be the peak of her solo career. Her follow-up album,1994’s The Sweetest Illusion, wouldn’t match its success, and though she went on hiatus after its release, she still performs and releases music. This album, though, is Basia at her finest, and stands as one of the best contemporary jazz albums of the Eighties.