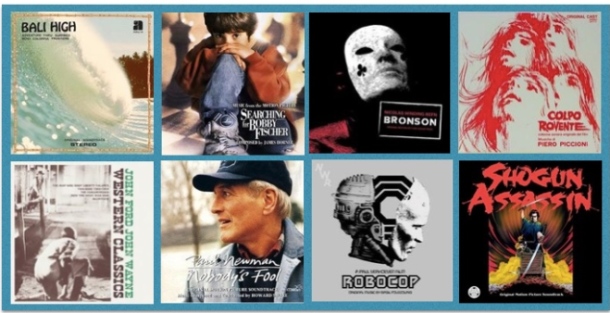 James Horner’s sudden, tragic death last month will no likely spurn a series of reissues and a reevaluation of his massive—and almost all superior—discography of film scores. One can find no finer example of his work than his score for Searching For Bobby Fischer, released in 1993 and reissued earlier this year by La-La Land in expanded form. The story is that of a chess-playing child prodigy, and it’s instantly clear that Horner appreciates the subtleties. Using soft orchestral tones; gentle, sweeping dreamlike melodies that neither overwhelm or overpower, with the occasional dramatic rise when necessary, such as on “Final Match.” Horner’s unhurried compositional style added a nostalgic touch; he will be missed.

There’s nothing nostalgic or subtle in La-La Land’s next release, a reissue of Howard Shore’s score for Paul Newman’s 1994 film, Nobody’s Fool. The mellow, easy-going, tranquil score illustrates how music can be used to accentuate a lushness to a film, while not necessarily having to enhance the drama. The pulse of the score is never hurried, and in true soundtrack form, the main theme’s melody often serves as a variation that reappears throughout the rest of the album. This is a restful collection of songs that flow together nicely, an enjoyable balm that serves as an enjoyable

Anthology Recordings’ latest Surf soundtrack is a reissue of the classic score to equally legendary Bali High. credited to Mike Sena. The score itself is a verifiable stew of sounds, offering up a wide variety of sonic styles. One minute you might be listening to an enjoyable, mellow acoustic guitar interlude, which then gives way to the sound of a quick burst of psych-rock, which then gives way to a woman singing soul music, followed by the sound of a loosely strung and lightly strummed sitar. It’s a score that doesn’t sit still, and if it seems massive, it should be remembered that there was never an official Bali High score; this is its first appearance in any officially sanctioned commercial format. It’s a sonic head trip that deserved to be pulled from obscurity, and it’s an album that will lull repeated listens out of you.

John Wayne was one of legendary director John Ford’s favorite actors, the two of them collaborating on many films. Western Classics (El/Cherry Red) is a collection of songs and scores from many of those films, and true to form for the label, the collection is nothing short of compelling. Featuring songs from five films—including the complete score for 1963’s McLintock!—it is an interesting scrapbook of material, including a Burt Bacharach composition, “The Man Who Shot Liberty Valence,” (but not the Gene Pitney hit version), Leopold Stokowski’s rousing take of “Blue Danube,” Lonnie Donegan’s theme to “The Comancheros,” Alfred Newman’s rousing score to How The West Was Won, and the duet between Jerry Van Dyke and Stefanie Powers is not to be missed.

Basil Poledouris was a masterful Hollywood score composer, having written nearly a hundred in his lifetime, with sci-fi thrillers and big-budget action films his specialty. One of the most impressive is his score for Robocop, which has been reissued on vinyl by Milan Records. Music-wise, half of the pieces are short, brief passages of less than two minutes in length. Don’t let that fool you, though; Poledouris could squeeze in quite a lot in that brief amount of time; “Nuke Em” and “Directive 4” feel as long as longer pieces like “Looking For Me” and “Murphy Goes Home.” Robcop the film is still as exciting as it was three decades ago, and the soundtrack still sounds as exciting as it did back then.

Milan’s other reissue release, Bronson, isn’t a score, but a soundtrack for Nicolas Winding Refn‘s 2008 fictionalized biopic of criminal Michael Gordon Peterson, who used the name “Charles Bronson” as his moniker. It’s an interesting blend of orchestra pop, classical, and New Wave. Pet Shop Boys’ “It’s A Sin” sits next to the Eva Abraham’s jazz-pop nugget “Santa Please (Come Early This Christmas)” and Ray Martin’s comical orchestral number, “Meet Mr Callaghan,” while the classical pieces add a darker touch. Of course, The Walker Brothers’ offering is one of the darkest Scott Walker numbers, while New Order’s “Your Silent Face” burns with a melancholic sadness that feels quite at home here.

Shogun Assassin (Cinewax/Light In The Attic) is an interesting release. It’s the reimagined soundtrack to a Samurai film, scored by W. Michael Lewis and Mark Lindsay (of Paul Revere & The Raiders), all composed on a Moog Modular synth. The film would probably be lost to obscurity, were it not for the influence it had on Wu-Tang Clan founder GZA, who widely sampled it on his album Liquid Swords. The score itself—recorded and released in 1980—is lovely, if not a bit dated; one can definitely hear the influence of Tangerine Dream in “Lone Wolf’s Theme” and “Eyes of a Demon.” Not an essential collection, but a lovely listen nonetheless.

Piero Piccioni’s trippy score to crime thriller Colpo Rovente, released in 1970, has just been reissued by Beatball.  It’s a film that takes place in the criminal underground, and considering what the underground consisted of in that time period, the music reflects that druggy era. It’s a blend of mellow, jazz-influenced pieces (“Endless Love,” “Fuoco”) easy listening (“Acapulco,” “Eros,” “Mexican Dream), and blasts of pure psychedelia (“Chinatown Drugs, “LSD). This reissue enhances the score with bonus tracks that comprise an alternate version of the original record, and often—as in the case of “LSD”—these are radically different versions. But all in all, Colpo Rovente is an amazing little time piece from 1970. If you want more Piccioni—and who wouldn’t—El Records’ Mafioso & Other Great Piccioni Scores compiles highlights from some of his many scores from the late Fifties and early Sixties, as well as adding a gorgeous and extremely rare collaboration with Lydia MacDonald, from 1962.