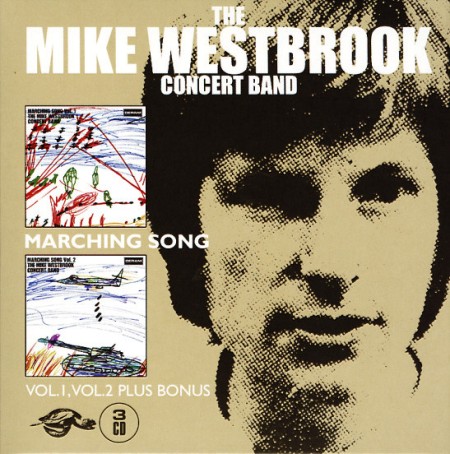 The turbulent political climate of the late 1960s proved to be a fertile time for artistic statement, especially when the subject was the Vietnam War. It was hard to find a band or musician who didn’t have something to say. Most of these statements were direct and easy to decipher, but more interesting were the abstract statements, thought pieces that required the viewer or listener to draw their own interpretations and conclusions. The Mike Westbrook Concert Band’s conceptual two volume set Marching Song, released in 1969 by the progressive British label Deram, was one of the more unique anti-war statements, as one might not expect such sentiments from an big band jazz orchestra. This three-disc set compiles both of the albums, as well as a bonus disc of choice rarities and outtakes from the era.

Without listening to a single note one would gather that the subject was war, as both albums featured child-like drawings of airplanes dropping bombs. Listening, however, is a different story, as discerning the subject isn’t instantaneous. If anything, Volume 1 feels less like a statement on war as it does the type of music one might have heard in a dancehall on a Saturday night during World War Two; the up-tempo swing of “Hooray” and “Waltz” find the orchestra indulging in some quite delectable dance numbers. Yet listen closely to “Marching Song,” which closes Volume 1, as you’ll hear the distant sound of something darker, more ominous on the horizon. What had been relatively tranquil orchestra jazz suddenly becomes quite cacophonic; the incessant late-era Coltrane style saxophone squealing will make you feel as if something is about to go amiss, even if you’re not quite sure what that might be.

When one gets to Volume 2, the war is definitely on. Westbrook builds up the tension built up in “Marching Song,” but subtly; the set begins with a trio of soft, gentle ballads, scaling back the tension that concluded Volume 1. But the fourth number, “Prelude,” pulsates with an odd tension that leads up to the upbeat but noisy “Tension,” cumulating in the ten-minute cluster-bomb that is “Conflict,” an all-out free-form jazz freak-out that cannot be mistaken for anything other than the insanity of combat; the insanity is followed by the brief but somber “Requiem” and the melancholic ballad “Tarnished,” before ending with the ominous “Memorial,” one that blends the insanity of “Conflict” with an almost sarcastic variation of “My Country Tis Of Thee.”

Included in this set is a third disc, entitled When Young. It features two songs from an obscure 1970 single collaboration with vocalist Norma Winstone, recorded during the same sessions as Marching Song. It’s the three other songs that really intrigue; an early version of “Marching Song,” recorded by the Mike Westbrook Sextet, is missing much of the electrifying saxophone workouts, while the other two pieces, “When Young” and “But It Must Get Better, And It Will Get Better” are grand, epic pieces that both break the ten minute mark and are gentle, lush orchestral jazz that might have been a little too mellow for the original set but definitely are nice to hear now.

Marching Song itself is quite an accomplished record, a thoughtful, thought-provoking album that is succinct enough to make its point but abstract enough to allow the listener to draw their own conclusions about the message of the music. Thus, it escapes the fate of so much anti-war music, in that it’s not preachy, didactic, or too reliant on the times for it to be fully appreciated. If anything, the music seems so incongruous to the concept behind it that this listener initially didn’t pick up on it. Which is to say that such is the sign of a true talent; make enjoyable music and make a statement. For Westbrook, the Concert Band would disband shortly after the release of the Marching Song set, but he has continued to be a driving force in the small but fertile British jazz scene. Understandable, too, for someone who could make such a brilliant, enjoyable, and thought-provoking artistic statement.