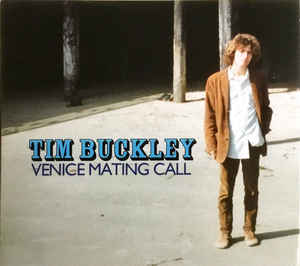 Singer/songwriter Tim Buckley possessed one of the most beautiful voices of his time. Though he began his career as a rather standard folk musician, he would soon encompass jazz in his songwriting; his music would become quite complex and challenging. He soon took another stylistic left turn, abandoning his experimental side for straight-up blues-influenced rock that he labeled “sex funk.” Sadly, he would die shortly after the release of 1975’s Look At The Fool, a day after completing a tour that he was using as the basis of a planned comeback. Venice Mating Call, a new compilation of live recordings taken from his residency at the Troubadour in September 1969, is a welcome addition to Buckley’s small but venerated discography.

At the time, Buckley’s muse was in transition. After two fine albums of rather traditional folk-rock, he had started to take an interest in fusing free jazz techniques to his songwriting. He had only recently released his third album, Happy Sad, which offered up some startling new sounds, with longer songs and more complex arrangements. While elements of his previous albums could still be found, it was clear Buckley wanted to do something new. The setlist for Venice Mating Call finds him performing much of Happy Sad, as well as the entirety of the album that would really propel him into the free jazz stratosphere, 1970’s Lorca. That album’s highlights, “Driftin’,” “Anonymous Proposition,” and the title track still sound as alien and new as they must certainly have seemed when he first performed them. “Blue Melody” and “Chase The Blues Away,” hail from Blue Afternoon, the album he would release just two months after this performance. Though that album would become one of his career high points, in the face of the more experimental fare found here they already sound out of place. (Also notable is the notorious and seemingly fortuitous wisecrack, “All we are saying is give smack a chance,” which would posthumously be used as evidence by some that Buckley had a heroin problem.)

The recordings of Buckley’s Troubadour residency are easily some of the finest documentation of Buckley the live performer, and Venice Mating Call is most certainly a welcome addition to the Buckley canon. Though what would come next for Buckley—a year of wandering in the wilderness as he explored challenging music that his audience did not support—these recordings show that he began his journey into unknown territory in fine, fine form.