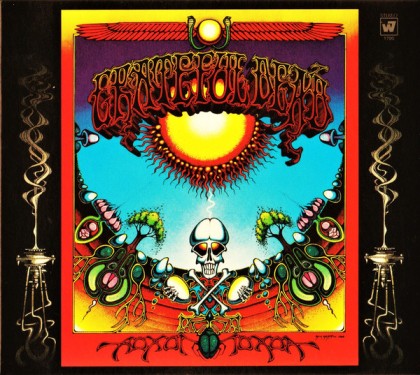 It would seem that after honing their reputation as a live band, San Francisco psychedelic rockers The Grateful Dead had yet to really make a truly strong, cohesive studio album that captured their experimental side. Their debut, The Grateful Dead, pegged their roots-rock and folk side, and though their second album Anthem Of The Sun is hailed as an innovative song cycle, it was a blend of live recordings and studio recordings mixed together into something completely new. It was thus decided that the band would enter the studio and make a purely studio-based album. The resulting album, 1969’s Aoxomoxoa, would simultaneously be their most experimental studio record, and one of their costliest blunders, It would also, in its own way, provide a template for music of the future.

In 1968, recording studios in California had started utilizing sixteen-track tape decks, allowing for the development of more nuanced, sophisticated, and complex music. The Grateful Dead were keen to explore how this new technology could expand their sound. Enthralled, they began working on new material that would be built from scratch and made with the larger palate in mind. Unfortunately, the shiny new toys distracted them, and by the time the album was released, they had spent hundreds of thousands of dollars—which roughly translates into well over a million in today’s valuation.

Listening to Aoxomoxoa fifty years later, one wonders what all the fuss was about, as it most certainly doesn’t soundlike a bloated waste of money. What it does sound like is a fuzzy, blurry mess. Apparently, it had yet to be realized that the more tracks you have didn’t mean that the songs would sound more intricate. As a result, at times the album sounds like a pillowcase is covering the speakers. But thanks to the skyrocketing cost of recording, Warner Brothers wanted the album out, even as they threatened not to release it. Garcia and Phil Lesh would revisit the album in 1971, remixing it, removing excess, replacing vocal tracks, and polishing it up. In so doing, they might have brought new life to “Mountains Of The Moon” and “St. Stephen,” while the remix completely improved “Doin’ That Rag” and “China Cat Sunflower.”

Yet one heavily edited song would undersell the original. “What’s Become Of The Baby” is a spacy, echo-laden epic that was a truly experimental sound, perhaps the only number on the album that achieved the psychedelic innovation they sought in the first place. Listening to the original version in 2019 is revelatory; listening to it, you hear the future. You hear the future sound of weird, trippy art-rockers The Flaming Lips and the Butthole Surfers, a foreshadowing of a sound no one would have predicted in 1969. The remixed version removes the weirdness, and thus sounds less like an experiment and more like a studio goof-off. It’s a shame, because the original version is absolutely brilliant.

Ultimately, nobody seemed satisfied with the material on Aoxomoxoa, and the band quickly moved on. Although “China Cat Sunflower” would become a standard in the Dead live show, aside from “St. Stephen,” they simply dropped the rest of the material a year or two after the album’s release.  (The live performance that features on the bonus disc culls tracks recorded in January 1969 at the Avalon Ballroom, and is merely okay; the two live tracks from Aoxomoxoa show that perhaps they already knew the material for their “masterpiece” was subpar.)  To make up for the time lost in the studio, they would quickly release two superb masterpieces, American Beauty and Workingman’s Dead, and they would never indulge in extensive studio experimentation again.