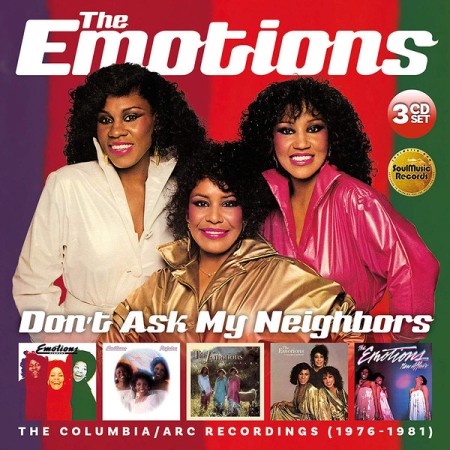 When one reconsiders the music of the Seventies, it’s impossible to deny the charm of Chicago-based trio The Emotions. Sisters Wanda, Sheila, and Jeanette Hutchinson may have seemingly burst onto the national scene in 1977 with their smash hit single, “Best Of My Love,” but they were hardly new; in fact, they had been struggling and working hard for the previous fifteen years. Their hard work was rewarded when they signed to Columbia Records, where they would enjoy a steady stream of quality releases. SoulMusic’s new box set, Don’t Ask My Neighbors: The Columbia/ARC Recordings (1976-1981), compiles all five of their albums and a clutch of rare tracks.

The Emotions’ story begins in the early 1960s, when the three sisters formed the Hutchinson Sunbeams, a gospel trio, but soon earned a following as a secular R&B group, and would change their name to The Emotions in 1968. They would sign to Stax Records and would release two albums and a handful of modestly successful singles. When the label shuttered in 1975, Earth, Wind, And Fire mastermind Maurice White helped them procure a deal with Columbia Records, and took over the role as their producer.

Their first album for the label, 1976’s Flowers, offered great promise. With a bright and vibrant cover featuring their smiling faces, the artwork promised something light, colorful, and friendly—and it most certainly delivered. The nine songs ranged from pop confections “You’ve Got The Right To Know” and “No Plans For Tomorrow,”  while offering some cool R&B with “How Can You Stop Loving Someone” and “Special Place,” a hint of disco “I Don’t Wanna Lose Your Love,” and even two brief Gospel pieces, “God Will Take Care Of You” and “We Go Through Changes.” Flowers was a fine step forward for the group, and its pleasing, easy-on-the ears music sold quite well.

“Best Of My Love,” the first single from their next album, 1977’s Rejoice, felt like the fulfillment of Flower’s promise of greatness. Commercially, it most certainly was; it was an international hit, and has since become their most beloved song. Furthermore, it has carried on a double life as being a fertile source for samples, most notably Mariah Carey’s smash hit, “Emotions.” But much like its predecessor, Rejoice is an album of unpretentious delights that doesn’t devote itself to one strict style; the upbeat pop of “A Feeling Is” and “A Long Way To Go” sit nicely beside the soulful R&B of “Key To My Heart,” while the lush balladry of “Don’t Ask My Neighbors” complements the disco groove bookends, “Rejoice” and “Best Of My Love.”

Yet considering the success of Rejoice, it’s perhaps a little surprising that their next two offerings—1978’s Sunbeam and 1979’s Come Into My World–would find the group honing their style into a rather distinctive sound, a disco-pop that mostly turned up the groove and eschewed the diversity of their previous offerings. Not that those two records were anything less than delightful; they offered both killer dance numbers (“My Everything,” “Come Into My World,” “Smile,” “I Should Be Dancing”) and mellow grooves (“Walking The Line.” “I Wouldn’t Lie”). While these two albums are certainly enjoyable, they lack the same spirit of their predecessors; thus, there’s a sameness to them that’s hard to overlook, occasionally feeling a bit too indebted to the disco sound. (Around this time, they would be co-credited with Earth Wind And Fire on one of the decade’s—and genre’s—last great disco classics, “Boogie Wonderland,” two versions of which feature in the handful of bonus tracks.)

The Emotions entered the new decade seeking a fresh new approach. Gone was producer and mentor Maurice White; even though his tutelage resulted in some fine music, 1981’s New Affair is a much more nuanced than its predecessors. It’s an album of sophisticated pop with a fresh new sound that seemed to be quite primed for the new decade. Having escaped from the unavoidable disco flare of their previous two albums, The Emotions returned to the R&B of their early days, tinged with a funk flavor not previously explored, and songs like “All Night, Alright,” “Turn It Out,” and “Here You Come Again” highlight a group poised to transition nicely into the new decade. Unfortunately, that didn’t happen, and for all of the album’s quality, compared to their previous releases, New Affair was only a modest success.

Though the story of The Emotions may have wound down in the mid-1980s—they would release but two studio albums after leaving the Columbia fold—they continue to perform to this day, either in a live setting or as studio backup singers. Their legacy—built on high-quality songwriting, superb production, and absolutely gorgeous vocal harmonies—is all but assured, and Don’t Ask My Neighbors is a treasure trove chock full of musical jewels.