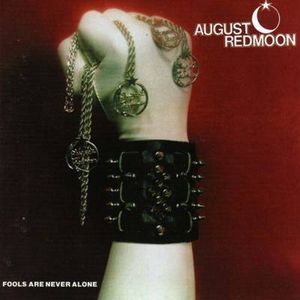 Every burgeoning rock scene has them: talented local acts who appear on the cusp of the new, popular sound, but for whatever reason never move beyond being a well-liked local act who scores one or two choice opening slots, and if they’re lucky, get to release one record or single before disappearing into obscurity, being a part of “scene history” that nobody but a few people remember. It’s not a knock on the artist or band in question; it’s simply how these things work.

Such is the fate of August Redmoon. Appearing in Los Angeles in the early 1980s, this hard-rockin’ foursome came to be just as the LA metal scene began to take off, appearing before the scene became a national phenomenon. Their sole release, a five-song EP entitled Fools Are Never Alone, is a pretty good slice of early 80s metal. Vocalist Michael Henry is a good singer, supported nicely with excellent guitar work by Ray Winslow. The five songs are rather atypical of the metal style of the era; Henry’s vocals aren’t soaring into falsetto territory, but it’s clear he is on a par with, say, Rob Halford, while Winslow’s guitar chops are burgeoning. The highlight here is definitely “Bump In The Night,” a powerhouse rocker that sounds like the best metal single you never got to hear.

Unfortunately, the band wouldn’t last too much longer after the release of the EP, regrouping as Terracuda.  Heavy Metal U.S.A., in addition to compiling all of August Redmoon’s recorded material, also features their three-song demo tape. It’s clear that they had a great sound; heavier, more thrash-minded, and more in tune with what was soon to become the heavy metal sound of California, especially on the epic “Survival of the Fittest.” Also featured are four live tracks from 1983, and though the sound quality is murky at best, it’s clear that on “Fear No Evil” and “ Soar With The Eagle” that the band definitely had a potent live set, and that the songs simply transformed into monsters when performed live.

Henry would go on to form Eden, and would obtain some modest success in the metal scene, occasionally brining in members of August Redmoon, but would succumb to cancer in 1998. Heavy Metal U.S.A. is an interesting, enjoyable collection of a young band that clearly had a spark of greatness, but sadly never quite reached their potential.