The Beach Boys: Wake The World: The Friends Sessions (Capitol) 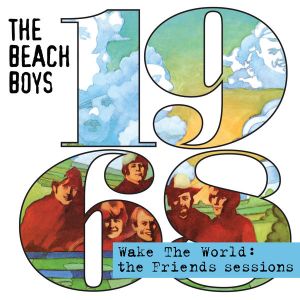 To say that the Beach Boys were in trouble by 1968 is an understatement. Their leader, Brian Wilson, had begun his descent into madness and mental illness thanks to an incessant and unchecked diet of LSD and any other drug he happened to find.  Brother Dennis was indulging in the same habits, not to mention running around with a weirdo name Charles Manson. Musically, they had been through the wringer; they had produced Pet Sounds, now hailed as one of the best albums rock’n roll ever produced, but at the time it met with disappointing sales. Smile, the album that was to follow it ultimately became a self-indulgent drug orgy that went unfinished simply because there was no way Brian could ever finish it, as it was too disjointed and nonsensical. The band had to pull the plug on Brian as it was obvious it was never going to be completed, causing him to retreat into drugs, his bedroom, and madness. The band, realizing the events of the year were not good things, decided to get back to their roots and quickly threw together Wild Honey, an extremely wonderful but absolutely different sounding record that ditched both the psychedelia and the band’s surf rock roots.

Friends was the follow up, and while Wilson was not fully involved, the band picked up the softer rock tones of Pet Sounds, creating what feels like a proper follow-up to that record. It is a surprisingly mellow album that highlights a band with newfound interests and influences in Burt Bacharach, Mike Love’s newfound spiritual regeneration via transcendental meditation, and easy listening. It’s one of the band’s finest albums, even if it’s considered their weakest albums of the 1960s.

Wake The World: The Friends Sessions is one of two installments in the band’s annual copyright extension releases for this year, and it’s actually perhaps one of the most important releases in the entire series to date. Organized as to present the material not by recording date but by the album’s track listing,  this alternate version of the album is as lovely as the finished version, if not more so. Alternate takes,  instrumental tracks, and a cappella versions of songs may have been a blight for previous volumes, but for an underrated album such as this, it’s quite revelatory.

The album opening “Meant For you” immediately highlights the value of the series. On the album,  it is a gorgeous thirty seconds opening refrain; the version found here is a full two minutes in length, complete with a longer harmonization and an entire verse seemingly lost along the way. That’s but one of the pleasures this Of this alternate version;  taking songs such as “Friends,” “Anna Lee, The Healer,” and “Little Bird” and placing instrumental backing tracks next to a cappella versions helps to highlight that even though this album might be considered a ”lesser” album, it was still a very complex and intricate recording.  It also shows that the band had learned quite a lot about Brian’s recording style and had become as adept as he had been. (One could also probably make a case that this should put paid to the notion that the band did not care for this new musical direction,  but that is an argument for another time.)

Unsurprisingly, the unreleased material offered here is a mixed bag; while the 14 songs are certainly compelling, they’re definitely more for the completest.  A few of them are superb; the cover of Bacharach/David’s classic “My Little Red Book” finds Brian at the piano, reveling in a humorous, melodramatic vocal of a song he clearly loves, “Be Here In The Morning Darling” is an easy listening instrumental that has no real connection to either song, while “Away” and “New Song” are brief sketches of ideas. Yet if you’re expecting “You’re As Cool As Can Be” or their cover of Buffalo Springfield’s “Rock And Roll Woman” to be great lost outtakes, you might be disappointed, as you both are merely okay instrmentals. You won’t, however, be disappointed in the demo of “Passing By,”  which was a fine instrumental on the finished album, but is offered here with complete lyrics, and while the final version is fine, this lyrical version is equally as good.

Friends has always been something of a sleeper in the rest of the 1960s catalog, but those who know of it find it to be a charming and beautiful little record. This collection offers up evidence that even though the album wasn’t successful at all, it wasn’t for lack of effort; Wake The World shows just how quickly the rest of the band had matured into being able to fill brother Brian’s very large studio production shoes.