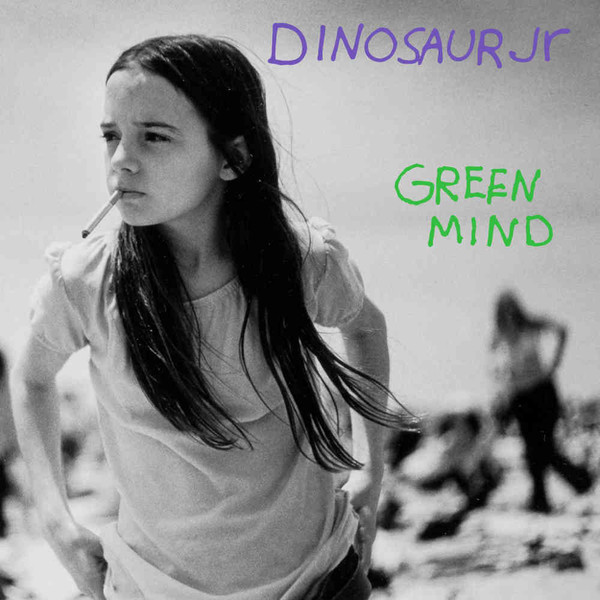 Dinosaur Jr mastermind J Mascis started the 1990s by signing to major label Sire/Warner Brothers, debuting with 1991’s Green Mind. For a hard-working independent rock band of the time, such a move might prove shocking. It was the right move; the albums he released have since become legendary, revered pillars of the alternative rock canon. Cherry Red‘s reissues update all four albums, expanding them to two disc sets featuring b-sides, outtakes, live recordings, and radio sessions.

The signing hadn’t been a total surprise, although Dinosaur Jr existed in limbo. Though they’d scored an underground hit with “Freak Scene” and their third album Bug, the classic lineup had fallen apart. Mascis fired Lou Barlow, who went on to form Sebadoh. Mascis composed and recorded Green Mind mostly all by himself. Murph appeared on three songs, as do friends and live members Don Fleming and Jay Spiegel.

Unfortunately Green Mind sounds like the work of a guy alone in the studio. Green Mind occasionally suffers from a sameness typical of recording everything yourself. That’s not to say that there weren’t some great moments, though. “The Wagon,” “I Live For That Look,” “How’d You Pin That One On Me,” and “Thumb” still rank as some of Dinosaur Jr’s best. Green Mind contains a few sublime moments, such as the lovely “Flying Cloud” and the forlorn “Puke + Cry.”

The bonus material offers up one of the finest EP’s of the alternative era, Whatever’s Cool With Me. A stopgap release that appeared that summer, the record collected b-sides and live tracks. Interestingly, the songs are much stronger than the material found on Green Mind, such as “Pebbles + Weeds” and the title track. J transforms David Bowie’s “Quicksand” into a reprise of “The Wagon,” resulting in a beautiful and sublime rendition. The second disc offers up a full live show entitled Live In Hollywood 1991, recorded that June. The Hollywood set is sloppy but fun; the album tracks transforming into heavy, stoned-out rock, while the older SST material shines.

Green Mind might have underwhelmed at the time, but the expanded edition makes it a much stronger release. Timing is everything, though. Green Mind arrived six months before Nevermind, and it didn’t fully benefit from the Nirvana and grunge-rock explosion. The promise of greatness Green Mind offered would most definitely be fulfilled with what came next…