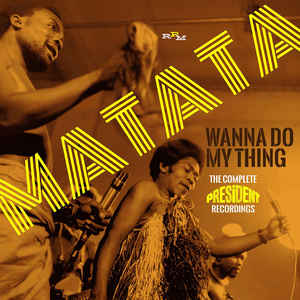 Kenyan-based musical collective Air Fiesta Matata—or Matata for short—shone briefly, held great promise, but never got the breakthrough they deserved. Though they formed in the early Sixties, it wasn’t until nearly a decade later that they started to get the attention they deserved. In that time, they released a handful of records, compiled handily on Wanna Do My Thing: The Complete President Records.

Matata’s first album, 1972’s Matata,recorded in Kenya, is an impressive debut. It’s a blend of native sounds and Western funk, and though it’s not a perfect record—the sound quality and production is often quite muted and hazy, and there’s occasionally a lack of clarity—it is a unique record, offering a glimpse into the sounds of modern African music. Hearing songs like “Jungle Warrior” and “Wild River” are thrilling, because the hybrid of Western and African styles sound like nothing you’ve heard before. For Matata, the band alternated between their native language and English; though you might not know what “Wowo Wosow” and “Picha Yako” are about, it matters not; these songs are all about the groove, and they have tons of it. When they do perform in English as they do on “Wanna Do My Thing” and “You’ve Gotta Find Me,” it doesn’t take away from the record, as Matata’s blend of the familiar and the foreign is what makes it so rewarding.

It was at this time that the band made headway in Europe and England, becoming a popular club act. Its easy to see why; their music was catchy, unique, and, most importantly, fun. Becoming a live favorite meant that they started to garner attention in the music world, with heavies like Miles Davis and James Brown soon declaring themselves as fans and offering them opportunities to advance their career. It seemed as if Matata was destined for a larger audience.

Yet in spite of their popularity, they lacked a hit record, So, for Matata’s second album,1974’s Independence, the band made a creative decision that certainly seemed sensible, but ultimately castrated the one thing that made them great. Considering they were spending a lot of time in Europe, they decided to eschew their traditional African roots, opting instead for a straightforward, western Funk sound. While the music on wasn’t bad, it effectively turned a unique African band into a second-rate James Brown knock-off. A pity, that, because it was their connection to the sounds of their native land that made their debut such a warm and inviting record.

That’s not to say that Independence isn’t without its charm, though. The progression to straightforward American funk, while disappointing, isn’t unsurprising—nor should one be surprised to hear how similar they sound to Brown, considering how they became associated with him at the time of their second album. Sure, “I Want You,” “I Feel Funky,” and “Return To You” sound great, but the grunts and “good God” interjections ruin otherwise fine songs. Better are “Getting Together,” “Something In Mind” and “Love Is The Only Way,” as these numbers eschew the clichés and prove to be some fine, 70s era funk.

Sadly, failing to find an audience after spending well over a decade working hard and touring the world and performing hundreds of shows a year led to disillusionment, and the band would split up not long after Independence was released. In the late eighties, several members reformed a version of the band and released a single, both of which reverted to a World Beat sound, eschewing the James Brown imitation that damned their previous record, resulting in a fresh, invigorating single, but nothing came of this reunion. Yet instead of mourning the missed opportunities, one should find solace in Wanna Do My Thing, as the two hours’ worth of music found here will surely satisfy.