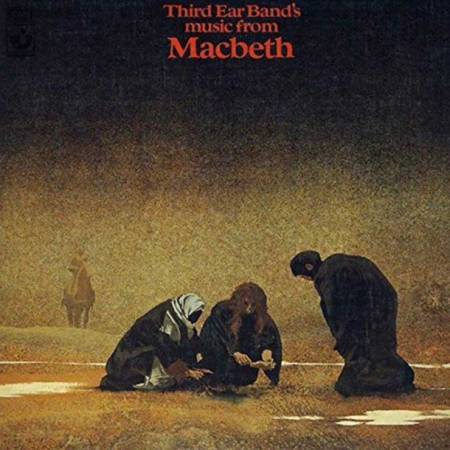 Film director Roman Polanski worked through the pain of the Manson Family murders in a most unique manner: making a film. Not just any film, though; he took on William Shakespeare’s Macbeth, one of the greatest tragedies of all time. Released in 1972, Macbeth is a naturally dark and disturbing production made all the more thought-provoking through subtle and not-so-subtle allusions to the murders. A dark production requires an equally dark score, and British progressive collective third ear band were selected to do the job. Esoteric’s recent reissue of the score indicates Polanski made the right choice.

Third Ear Band came to be in the late 1960s and made a name for themselves as a top notch live act known for blending classical and medieval instrumentation with modern rock sounds and improvisation. Prior to being recruited by Polanski, the troupe had seen some success for their score of the 1970 score of the film Abelard and Heloise, so the group was eager for more soundtrack work. Seeing the opportunity to experiment, they approached  Polanski with a request: they wanted to record a live, improvised score as opposed to a preplanned composition.  Such a move was bold for a big budget production, but one that the filmmakers accepted. Polanski, however, took an active role in this soundtrack, attending sessions and making sure the band had to visual stimulation needed.

Music From Macbeth is a dark, dreary, and disturbing album, one that perfectly fit the soundtrack. Consisting of sixteen pieces, the album ebbs and flows as one continuous whole, and with many of the pieces being less than two minutes long, it’s not an album to be taken piecemeal. At times the music is so dissonant and harsh—the mixture of medieval instruments and modern technology when together like oil and water—listening can be difficult. Music From Macbeth’s overture sets that standard from the get-go, but yet the cacophony can be oddly appealing, such as on “The Banquet” and “Court Dance.”  Then there’s “Fleance,” which is sung by the actor Keith Chegwin, and is based on a poem by Chaucer. It’s a beautiful ballad, and though it breaks up the flow of the atmospherics, it feels oddly out of place; unsurprisingly, the band did not care for it, as it felt disjointed from the rest of the album.

Macbeth was a flop, but it remains a fascinating and difficult work of art.  Its soundtrack is no different;  it is a complex, dense work of dark and foreboding compositions that can try the patience of even the most steadfast listener. Still, approached as a wholeMusic From Macbeth is nothing less than an interesting and compelling musical artifact.